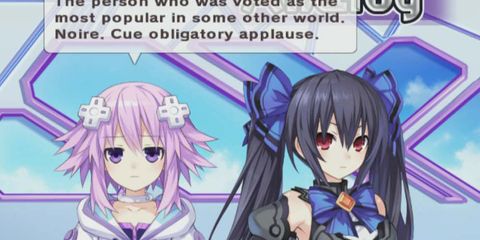 The trio of goddesses in the Hyperdimension Neptunia series represent Nintendo, Sony, and Microsoft products, all vying for dominion over the world of Gamindustri. It's an exciting (albeit contrived) setup for a quirky JRPG, with plenty of moe female characters in skintight outfits, mixed with an allegorical adventure meant to represent the long-running console wars. Unfortunately, a game can't operate on premise alone, and that's Hyperdimension Neptunia Victory's greatest downfall. It's a small progression from the previous entries, but with each tottering step forward, it stumbles one pace back.

The eponymous Neptune is the player's guide through Gamindustri, having been transported to a bizarre alternate dimension where she’s been stripped of most of her powers. We follow Neptune and the rest of the goddesses of the once-peaceful Gamindustri on a raucous journey through this multi-faceted virtual world.

While Victory's narrative has some interesting moments, what sounds like engaging plot points actually translates to plodding, puerile events coupled with repetitive and cloying dialogue. Though it's clear an abundance of effort was spent on localization complete with double entendres and clever jokes, most of it is wasted, sandwiched between unnecessary breakdowns and simplistic tutorial-esque chunks of speech. Fourth-wall-breaking sentiments are expressed fairly often, denoting several issues that the developers themselves seem fully aware of. Unfortunately, this self-deprecating humor doesn't make the problems any less bothersome.

Though this self-aware game about games fails to deliver engaging plot threads or any real sense of agency, it could've been redeemed by more exciting combat and satisfying quests. Combat is a standard affair, giving players the option of power, rush, and break attacks. Additionally, special moves are available to add some variety: healing spells, over-the-top attacks (including infamous "chest" rockets) and other wacky abilities.

The turn-based battles can quickly become quite zany despite their slow nature, factoring in the HDD, a mechanism that allows characters to transform into super-powered versions of their Goddess selves. Flashy transformations and noticeable improvements in damage and defense ratings accompany these upgrades. Once transformed, characters can use the EXE drive to unleash a devastating, last-resort attack. It's an interesting spectacle, but is mostly reserved for coup-de-grace assaults rather than primary attacks.

Variety isn't as important as party member positioning: Spreading party members across the battlefield ensures that they'll receive less damage. On the flip side, you can surround and gang up on multiple enemies, though having party members grouped together heightens the danger of a swift defeat. This element of strategy adds a basic tier of challenge to the standard turn-based formula, but does little to spice things up further. At least the enemies themselves are interesting--players will be delighted to see parodies of real-world video games, such as Tetris blocks or Pac-Man ghosts.

Where Victory becomes endlessly frustrating is the quest system. Completing quests is an integral part of any traditional JRPG. Where the combat and dungeon-crawling represented dull yet able (and sometimes engaging) mechanics, the poorly-implemented quest system is bland and broken.

Once you've taken the first plunge into the world of Gamindustri proper, you'll notice that questing and obtaining errands takes place in a static hub world. From there, an astronomical amount of fetch quests await. It's one thing to include a ridiculous amount of busy work for completionists to tackle, but forcing players to partake in dozens of identical quests, just to move the story along, is dreadful. They're rarely interesting, feel hopelessly tedious, and act only as a means to artificially lengthen the game. Between these errands, dungeon-crawling, and battles, there's a barrage of samey mechanics that begin to erode any sense of excitement hyped up by the colorful and enticing world.

You can't argue the quality of the eye candy, though. The Gamindustri Goddesses are anthropomorphic realizations of the consoles they're channeling, rife with the exuberance of anime and the hyperactivity attached to the genre. For the most part, the dubbing is competent, if a bit forced in some places. Thankfully, that's an issue easily resolved by changing to the Japanese audio track instead. Amidst cheery J-Pop and techno battles tunes, it feels more authentic.

Hyperdimension Neptunia Victory had the potential to improve tenfold upon the previous games, but squanders the opportunity for flashier transformations and hundreds of quests. A better-fleshed-out narrative, punchier dialogue, and less bland combat would've done this installment good--but just like the real-life console wars, there’s always hope that the next generation can bring about change.