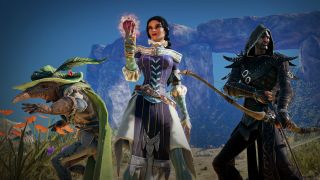 I was really sad Fable 4 wasn't at E3 2019, and I definitely wasn't alone. When a Fable 4 leak appeared earlier this year - which apparently includes different planets, time travel, and an obliterated Albion - I reckon it's fair to say many of us assumed we'd be getting a long-awaited Fable 4 announcement at this year's E3, but we were wrong. Phil Spencer, executive vice president of Microsoft, has told Kotaku why the game wasn't at least officially hinted at this year, and it sounds like we're going to be waiting a while for any concrete information about the title.

Spencer says that when it comes to revealing Fable 4 for real, he wants "to make sure that when we talk about things to come, whether it’s Fable or not, that the team feels very solid about what they are doing. I will harken back to … the Marvel MMO. Anybody remember us announcing a Marvel MMO? We didn’t even have a team that was signed that would do the Marvel MMO." Sounds like Microsoft learnt their lessons from that mistake, as Spencer goes on to talk about how his team decides when is the right time to officially confirm which games are on the horizon.

"Running a studio organization and making sure we’re talking about games at the right time, when we know what we’re trying to build - I’m not making any comment specifically about Fable; it’s about anything in the portfolio ... that we have … some idea of when it would come out" is a priority, says Spencer. "The thing I love about our [E3 2019] show was 60 games and the first party games - I could tell you when those all were shipping, and I can play those games, most of them here, and can put my hands on them and make promises." Looks like we're not going to be getting any kind of tease about Fable 4 until Microsoft are certain they can give us a release date and show some gameplay off, and you know what? I'm ok with that. If waiting longer means we get a longer, better official look at the game then sign me up!