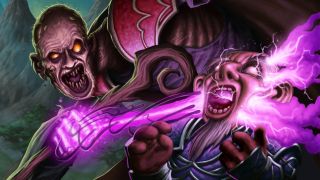 Hearthstone's Year of the Dragon has really shaken things up for the better, with constant tweaks to the Standard format that have repeatedly revitalized the meta with exciting new possibilities. Blizzard has taken a much more proactive approach to making changes this year, like sending Baku and Genn Greymane to the Hall of Fame a year early, a balance patch keeping Rogue in check, and even the Rise of the Mech event that made sweeping buffs to fun cards from last year's expansion The Boomsday Project. Now, Hearthstone is getting another surprise update that makes welcome changes to the Classic set.

In an official blog post, the Hearthstone developers outlined the design philosophy for each of the nine classes, included their intended strengths and weaknesses. "As we've worked to define what each class should bring to the table, we've found several cards that don't match our established class identities," they wrote. The two cards getting sent to the Hall of Fame are Vanish, Rogue's get-out-of-jail free card against opposing boards full of scary minions, and Mind Blast, the Priest spell that can do ridiculous face damage with certain combos (usually involving Prophet Velen and Archmage Vargoth).

To ensure that Rogue and Priest aren't missing out on class spells in their Classic repertoire, Blizzard is adding two simple cards as replacements: Radiance and Plaguebringer, which you can see in the gallery below. Radiance is another easy combo with Gadgetzan Auctioneer, while Plaguebringer is just a slightly more reliable Plague Scientist that can live on in Standard forever. In an unexpected twist, Blizzard is also introducing eight(!) new cards into the Classic set, which you can peruse below as well.

For my money, the biggest cards to note are the new neutral Legendary minion High Inquisitor Whitemane (which gives all classes access to the resurrect abilities typically reserved for Priest), and Paladin's new spell Righteousness that will make a board full of minions that much more resilient. The rest seem like nifty additions that won't radically shift the meta but could lead to some fun new deck types (particularly Arcane Devourer paired with Questing Adventurer).

"We're always assessing the prominence and impact of cards from every set, including Basic and Classic, and will continue to make changes when we believe it makes for a healthier meta-game and a better experience for players," the Hearthstone team wrote. "This may come in the form of additions to the Hall of Fame or with the introduction of new cards that we feel bring some fresh new options to players, while still being healthy for the game."

If you're just getting started in Blizzard's ever-changing card game, here are the best Hearthstone decks for beginners. Or see what's happening this week in games and entertainment with our latest Release Radar: