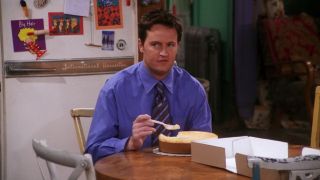 HBO has just announced a new streaming service. HBO Max is coming in 2020 and will fight it out with Netflix, Hulu, Amazon Prime and newer rivals like Disney+. Honestly, at this point, I'll be surprised if my Aunt Karen isn't pitching me her own entertainment brand by Thanksgiving.

The news is a big deal if - like me - you're hooked on HBO's mix of prestige television like Game of Thrones, Westworld, Big Little Lies - and the upcoming Game of Thrones prequel TV show and Watchmen series - and macabre crime documentary. It's also major news if you still find yourself cracking Chandler Bing jokes, because HBO Max has wrestled Friends from Netflix.

The One Where We Have To Say Goodbye.We’re sorry to see Friends go to Warner's streaming service at the beginning of 2020 (in The US). Thanks for the memories, gang ☕July 9, 2019

It'll also be the place to binge The Fresh Prince of Bel Air and see DC Entertainment's Batwoman before it airs on The CW, plus lots of "exclusive original programming" - called Max Originals - like Denis Villeneuve's Dune: The Sisterhood, the new animated Gremlins series, and a post apocalyptic limited series based on the smash novel Station Eleven.

“WarnerMedia has three things going for it with this new streaming service" said Pitch Perfect star Anna Kendrick, who will star in a Max Original called Love Life. "One, they have an incredible history and legacy of storytelling. Two, they’re super future-focused and trying to be the best. And three, they’re letting people like me embarrass myself episode after episode until I find love. I couldn’t be more excited to be a part of this family.”

Game of Thrones author George R.R. Martin - who probably has a gold toilet thanks to HBO - is also backing the service.

"Working with HBO during the past decade has been a dream come true. What they did could not be done, but they did it anyway. And now they are embarked on a new venture. No, they won't be tying their shows to the legs of ravens as I suggested... instead they are launching an exciting new streaming platform that will carry all the great HBO programming around the world... classic old shows and thrilling new shows, including (I hope) a return to my world of Westeros. Sign me up."

There's no price set for HBO Max yet - though right now the current HBO Go service costs $14.99 per month - or any release date beyond 2020. We do know HBO is promising "10,000 hours of premium content," which will definitely get you through a few lazy weekends.

Need a new TV ahead of the streaming boom? We're tracking all the best Amazon Prime Day game deals right here. Some online stores give us a small cut if you buy something through one of our links. Read our affiliate policy for more info.