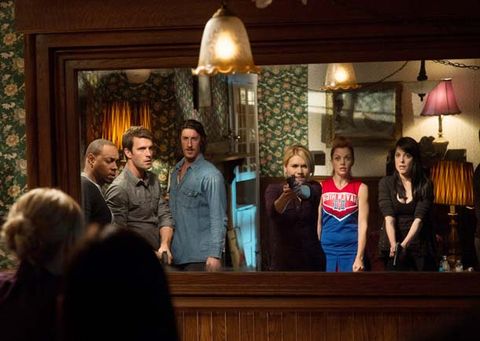 THE ONE WHERE A haunted house decides to wreak revenge on Audrey, believing her to be Lucy (who had pretty much condemned the house previously).

VERDICT Well… er… um… Not really got much to say about this tepid attempt at a Halloween episode, except that it’s shocking how it makes a major, game-changing revelation – the identity of the Colorado Kid, for Haven’s sake! The first time we’ve heard him talk in fact! – ends up feeling so mundane. This is a pivotal moment, folks! But we wouldn’t blame you if you accidentally dozed through it … “Real Estate” is a repetitive, artlessly padded snorefest.

The plot would be farcical if it weren’t so dull, with all the regulars beating a path to the spooky old house on the flimsiest of pretexts (Jordan especially: “I was stalking Nathan” is what it basically comes down to). By the time Dwight turns up, the writers have given up finding reasons.

Most of our hapless heroes become trapped inside, victims to the house’s moving walls and shifting corridors, down which they endlessly prowl up and down, back and forth, in various pairings, becoming ever more and more paranoid. The house, y’see, is actually the embodiment of the guy who used to live there. He sees through mirrors, hears through intercoms and speaks like that bloke from Game Of Thrones doing a really bad American accent. It should be creepy, but it has all the atmosphere of Bristol bus depot. The tensions created between the characters as the House tries to turn them against each other feel hollow. Even the normally reliable Duke and Nathan have few moments of good, meaty characterisation. Okay, Nathan has a heroic mirror-blasting set-piece (which seems to have been shot under the belief that if a you make the action noisy enough, it'll look exciting) but his relationship with Jordan feels awkwardly staged and an blandly artificial this week, after being handled so well previously.

Audrey, meanwhile, is having flashbacks to when Lucy was in the house and – blimey O’Reilly – the Colorado Kid is there too! Which should be really exciting. It’s actually disappointingly humdrum.

The best moment in the episode is when the house pushes a gun in Jordan’s direction using a sneaky, living power chord, mainly because it make you think, “It’s been far too long since I watched Little Shop Of Horrors .”

BEHIND-THE-SCENES Notice who the director is? Yep, the guy who was in Beverly Hills 90210 , who guest-starred in a few episodes of Haven last season as Chris Weekly (the man with the Trouble that made everybody love him). He also directed season two’s “Lockdown”.

KING CONNECTIONS James Cogan was indeed the name of man whose body was discovered in the Stephen King novel The Colorado Kid . There the similarities end, though. Cogan in the novel was killed three years earlier and was much older (born in 1937).

FAN OF THE WEEK You have to love Dr Callahan turning up for a Halloween party as Buffy The Vampire, but when the team decamped to the spooky haunted house, why the Hell didn’t she take a coat with her?

EH? Sorry, were we missing something when Dwight tells Duke that the bomb he’s made has a 10 second timer on it? What difference was a timer going to make?

BEST LINE
Tommy: “Ghosts? Anything else you people want to let me in on that goes on around here, huh? Mermen? Aliens? Dracula?”
Duke: “We're not sure about Dracula.”