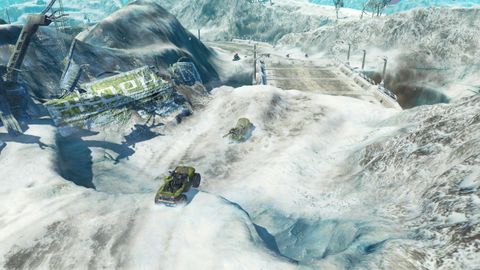 A whole new genre for one of the most valuable properties in gaming, or a basic Command & Conquer-alike with the Halo name slapped on? Our early enthusiasm waned with the closure of Ensemble and a less-than-stellar preview version, and despite trying our best to see the positive side, Halo Wars remains a damned difficult game to warm to.

The borrowed foundations will be immediately familiar to RTS fans. You start with a base that can be customised with a limited number of bits to make it capable of producing different types of vehicles and soldiers, including many you won’t have seen in the proper Halo games. Depending on how you develop your army, you’ll have access to flamethrower marines, modified Scorpion tanks that lob devastating cluster bombs, Elephant mobile fortresses, multiple grades of Warthog jeep and even a handful of Spartans.

Bases can be expanded and upgraded, adding self-defense capabilities and extra modules for developing technology and processing resources – the game’s currency. Larger maps allow the building of multiple bases, making it possible to max out the army and hit a unit cap which can be increased, in some cases, if you have enough resources to spend.

After a while you’ll amass the kind of war machine that would breeze through any of Halo 3’s iconic set-pieces – a fearless, multi-skilled task force equipped to fight on foot, on wheels or in the air, and capable of replenishing itself as it rumbles through enemy strongholds. But no matter what specialities you decide to invest in, the tactical potential of any battle is woefully limited. When the bullets start flying it almost always degenerates into a headlong charge towards the enemy, the limited controls and jerky framerate lending your army all the responsiveness of a broken shopping trolley after a treacle spillage on aisle nine.