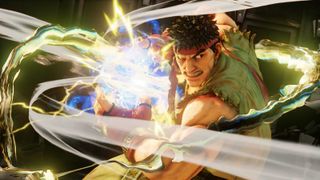 Just after Street Fighter celebrated its 25th anniversary, a photographic meme spread across Japan.The first participant in the picture would be seen leaning forward in a deep lunge, the leading leg bent heavily, the trailing leg extended behind their torso, straight and purposeful. Their head would be slightly lowered, and the subject’s hands would be angled with fingers cupped, ready to catch (or, more accurately, deliver) a sizeable ball. The second participant, positioned a few feet from the first, would leap into the air at the very moment the photograph was taken, perhaps cradling their stomach as if having received a terrible blow. The caption would read: “Hadouken!”

The scene is familiar to any fighting game player, for the Hadouken, Street Fighter’s signature projectile ball of energy, went on to cut a swathe of influence through almost every fighting game that followed in its wake. The special move has the air of Eastern mysticism about it. The word itself is a Japanese coinage translated as “wave motion fist” or “surge fist” and, in the game’s fiction, is achieved by the fighter concentrating his or her ‘chi’ into a ball of tight energy in the hands, which can then be hurled at their opponent.

But in truth, Street Fighter creator Takashi Nishiyama, now president of Dimps (the contractor that created Street Fighter 4), was influenced by science fiction rather than martial arts when he designed the move. While Nishiyama exaggerated real-life martial arts to create the blazing uppercut known as a Shoryuken and the helicopter blade spin-kick known as Tatsumaki Senpukyaku, the Hadouken was lifted from the anime Space Battleship Yamato. The eponymous battleship has a laser missile weapon called Hadouho, which collects energy before blasting it through space towards the enemy. Nishiyama took the concept, shrunk it to human proportions and turned it into a projectile attack that could be used by a character to keep their enemy at a distance in both the original Street Fighter and SNK’s Fatal Fury.

The Hadoken, far from being a mere stock move available to all characters, was skilfully weaved into the game’s narrative. Only certain fighters, those who study the Shotokan style of karate, can deploy the move. Moreover, the size, colour, texture and properties of a character’s Hadouken communicate something about them. Ryu, the lead in Street Fighter’s ensemble cast, has a devastating example, one that travels quickly through the air. With a different joystick input, the ball can take on fiery properties, revealing the rage that lurks underneath Ryu’s calm exterior.

Ken – Ryu’s speedier, more flighty and flippant best friend – is a full-contact fighter whose style is built on his Shoryuken Dragon Punch at the expense of his slower, weaker Hadouken. Energy balls from the hand of Akuma, the pair’s devilish nemesis, shimmer with purplish evil and can be deployed in the air, demonstrating his interest in and study of Satsui No Hado, a dark form of martial energy. The ambitious Sakura, who learned the Hado style simply by mimicking Ryu, has a weak, imperfect energy ball that travels just a few metres before it expires. And Dan, the series’ comically ineffectual combatant, cannot even make his Hadouken leave the palm of his hand. In this way, the Hadouken bespeaks its creator, giving us shorthand insight into their psyche, yielding different styles and tactics.

In play, the Hadouken is an essential tool in many characters’ arsenals. It is used to control the horizontal field of play, to keep an opponent exactly where you want them. Timing mistakes in unleashing one can be grimly punished, however, since a Hadouken leaves its caster vulnerable for a few frames after it’s thrown. Fire a Hadouken from a suboptimal distance, or lapse into a predictable pattern, and your foe can hurdle the projectile and land a jumping attack, which is potentially the start of a devastating combo. Opponents who don’t have an energy ball attack of their own are often given means of getting around them. Hulking US boxer Balrog, for instance, can pass straight through projectiles with his Turn Punch.

The balance of risk and reward is wonderfully explicit in the Hadouken and there are few tools in the Street Fighter arsenal better suited to teaching a player about the importance of controlling the space between you and your foe. There is a moral here: in offense there is always danger and even if you bring a fireball to a fist fight, you’re not guaranteed victory.

The Hadouken is one of gaming’s most enduringly recognisable poses. In its outline we perceive power, training and control, but also the threat of risk. There is, however, another way in which the move has entered our language: it has become part of our muscle memory. Down, down-forward, forward + punch: the controller input was designed by Nishiyama to mimic the onscreen animation of the move, as if grounding oneself with the downward stick motion, then lifting the hands upwards and towards your opponent.

It is, alongside Mario’s ground pound and Sonic’s revving spin, one of the earliest and most enduring input sequences, one never forgotten once learned. The Hadouken may be science fiction, but in this way it has become part of us, something that can be summoned from the hands with concentration – just so long as they are resting on an arcade stick.