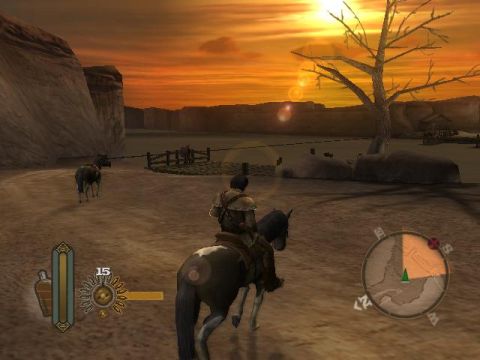 Gun nails a compelling balance between great story and great gameplay. As hunter Colton White, your world is upended when your father is killed in an ambush - right after he reveals that he isn't actually your father. Your quest for truth and revenge takes you down a twisted path through brothels, outlaw hideouts, the sheriff's jail, and into Indian territory. Without spoiling anything, Gun's gradually unfolding yarn is grade-A stuff that commands your attention. Stellar voice acting by a cast ranging from Kris Kristofferson (Blade) to Thomas Jane (The Punisher ) prevents the story from ever degenerating into standard videogame cliches.

The gameplay keeps both barrels smoking with intense third-person combat interspersed with side quests that give you a chance to catch your breath. You'll carve a path through a saloon, square off in duels on dusty streets, blow away marauding Indians with your shotgun, and even quietly stalk prey with a bow and arrow, all while swigging whisky to restore your health. The highlight-reel moments, though, come as you careen around on horseback through hornet-like swarms of airborne lead- the frantic intensity and fun never dulls, and a handy bullet-time move helps you survive when the crap hits the fan too hard.