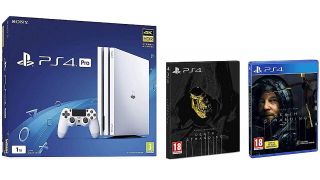 The Christmas turkey has been consumed, the crackers have been pulled, and hopefully a generous amount of cheer has been had by all. After sleeping that off, it's time to have a look at the online sales and see what Boxing Day deals are out there. If you've been considering upgrading yourself to a PS4 Pro, or want to treat yourself to a new high-end console, then Amazon have got you covered with some impressive cheap PS4 Pro deals that could see you owning a new machine by the end of 2019.

With the standard price for a PS4 Pro still floating around the £300-£350 mark, Amazon are offering up some tremendous savings here. Not only do you get the Glacier White PS4 Pro to make your new console stand out from the rest, but you can also bundle it up alongside one of this year's biggest critically acclaimed games with either Death Stranding or Call of Duty: Modern Warfare, which are worth £50 on their own.

PS4 Pro White with Modern Warfare | just £269.99 from Amazon
If Call of Duty is more your thing, you can grab this Modern Warfare bundle instead with Amazon exclusive bonus content for the same low price.View Deal

These reductions mean you could be saving upwards of £100 on these deals, so if you're interested then act fast - Amazon say that their Boxing Day sale runs until December 31, but with a cheap PS4 Pro deal this good it's likely their stock could run out before the end of the year. Don't miss out on your chance to play some of the best PS4 games in the highest quality possible, and save yourself a chunk of change in the process.

You can truly gauge the value and prices of the Pro by looking at the current best PS4 Pro deals on offer right now.