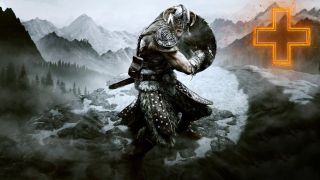 We're celebrating the end of an incredible decade for games, movies, and TV shows. The Elder Scrolls 5: Skyrim is one of the games that defined the last 10 years of play, placing 9th in our 100 best games of the decade rankings. Read on to find out why...

Look at me, and you may think you see an ordinary woman walking her dog or shopping for groceries or playing on her phone while she waits for the subway. Your eyes deceive you, because for one wonderful winter in 2011, I was the greatest warrior – nay, Dragonborn – that Tamriel had ever had the good fortune to see.

My memories of rampaging around Skyrim for that first time – and there have been many more, thanks to Bethesda's fetish for porting the game to everything but my Roomba - are embedded so deep in my brain that they feel clearer than genuine memories of real life.

When I get to reminiscing about werewolves, or being trapped in someone's mind trying to sort out their psychological problems, or that first taste of dragon soul after a successful kill, I get the urge to go back, like I'm recalling a bit of personal history rather than a game, and it's all because of Bethesda's magical world-building.

The Elder Scrolls Skyrim wasn't the first game to offer an open-world, but its biggest win was being the one that really delivered on the feeling every adventurer wants. That they were slaying and flaying in a breathing ecosystem where NPCs had shit to do, and weren't just waiting around for you to appear like bored extras on a film set.

These days we play Red Dead Redemption 2 and take it for granted that someone will have itemised a schedule for surly townsperson #238, but back then it was a revelation to follow an NPC and watch them patrol around the town, before returning to their own home and locking the door at night.

This world-building wasn't just confined to the big towns either, with miles of stunning but decorative landscaping in between. Once you were out in the world it felt as if there was a secret or story hidden in every cave, around every corner, and everyone you saw was the potential key to your next great adventure.

Nothing makes an open-world RPG fan more melancholy than a world where it feels as if every quest has already been completed, but the design of Skyrim delayed this feeling as long as possible, mixing small and strange escapades - like getting trapped in a troll infested painting – with big, story arcs like the Dark Brotherhood questline. Even today, a conversation about Skyrim with a fellow enthusiast can reveal an interaction or secret you missed, and then it's back to the PC, or Switch, or Amazon Echo to just take a peek.

The first time you really went nostril-to-nostril with a dragon, you got a sense of the size and power in a way that games had never really managed before, and even once my Fus Ro Doh energy was at its peak in a full set of Dragonplate armor, it still felt awesome in the old school sense of the word.. It always felt like the dragons got their revenge post-humously too, forcing you to scramble your inventory to make room for their heavy, but oh so valuable, remains.

We've had some amazing games since Skyrim that have built on its fantasy foundations, and no doubt there will be more to come with the whispers of Elder Scrolls 6 and Dragon Age 4 on the wind, but nothing will ever dim the shine of the first time I fired up my PS3 in 2011 and escaped from the prisoner cart as a dragon lay waste to the town around me.