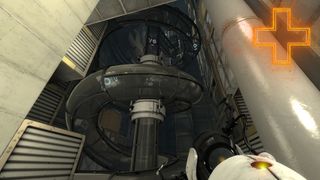 Making a sequel to a surprise hit is always a challenge. Valve had even more to contend with when it made Portal 2. Not only was the first game a perfectly proportioned morsel of puzzle-solving action, it was a goddamn online sensation. Internet culture was still coalescing in 2007 (everything had to have giant letters in Impact font back then, you know), but Portal helped shape it.

How do you follow up the game that made "the cake is a lie" such a common phrase that everybody in the entire goddamn world got sick of hearing it, regardless of whether they played video games? Portal 2 is the answer.

The pristine white test chambers from the first game are now choked with overgrowth and twitching robotic wreckage. The depths below yield miles of rusty walkways and Aperture Science history. Down there we meet Cave Johnson (or at least his voice recordings), the blustering chauvinist whose ambition and ego helped create the scientific hellscape we inhabit. His speech about lemons is the closest Portal 2 ever gets to its own "cake is a lie" moment. Fortunately, Portal 2 is big enough that it doesn't need one T-shirt selling line to define it.

Climbing through the strata of Aperture's corporate development with Cave narrating all the way is Portal 2 at its funniest, proving that Valve can deliver consistently humorous characters with a life beyond meme-worthy one-liners. Many video games are funny, some intentionally so. Relatively few attempt to be outright comedies. Of those that do, Portal 2 stands as one of the most successful.

When Portal 2's puzzles lean too hard on finicky timing or finding little splats of white paint in the distance, when they lose the purity and potency of those found in the original game, the humor keeps pulling you forward and endearing you to its cast. It's still easy to remember all of Portal 2's characters like cherished childhood friends, which is impressive given the fact that you never see another human being during your entire gauntlet through Aperture.

Even with Half-Life: Alyx on the way, Portal 2 deserves recognition for being the furthest point along the Half-Life timeline that Valve will likely ever make. The best part is the reason why all of this "testing" has been allowed to continue for decades (maybe even centuries) with no outside interference. Despite how much Aperture hates being shown up by its scientific rival Black Mesa, even its violent AI uprising went unnoticed by the rest of the world, all because Gordon Freeman accidentally broke our dimension a few days later.

All of this isn't even mentioning the multiplayer robot escapes of the Cooperative Testing Initiative, or the clever way that Valve banded community-created levels together for the semi-canonical Perpetual Testing Initiative (featuring even more words of wisdom from a suspiciously not-dead Cave Johnson). It feels odd that Portal 2 is still the most recent story-focused, full-scale game that Valve has created, but at least it was built to last. And unlike the Half-Life games, which have the bad habit of ending on cliffhangers that can last for decades, Portal 2's conclusion had the good graces to leave us with naught but a blue sky and a field of waving grain. Well, that and the return of our beloved Weighted Companion Cube. Sometimes a little meme humour is OK.

We're celebrating the end of an incredible ten years for games, movies, and TV shows. You can jump straight into the 100 best games of the decade here to see if your favourites made the cut.