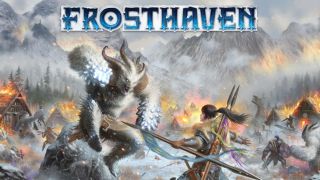 Frosthaven has finally been unveiled after three years of teasing, and PAX Unplugged dropped further details on this sequel to the Gloomhaven board game. Although it broke cover in newsletter-form late last week  (which you can read here after it was posted on Reddit by CompassionFountain), designer Issac Childres teased us with more info on everything from characters to mechanics during a livestream over the weekend. Much like its predecessor - which is often considered one of the best board games out there - Frosthaven is a dungeon-delving RPG where the consequences of your actions carry from session to session. Except this follow-up is hella chilly, as you may have guessed from the title. That's because it's set in the frozen north. Casting you as "a group of mercenaries at the end of their rope", players must contend with snow yetis, the elements, and eerie machines that walk the wastes with a will of their own. In the developer's own words, it's "Gloomhaven 2.0… another epic story on the scale of the original game, with the same complexity and grandeur". Sweet. It'll be landing on Kickstarter in March 2020, while the game itself is due by early 2021 at the latest.

(Image credit: Wizards of the Coast)

Best tabletop RPGs
If Gloomhaven's given you the roleplaying bug, our guide will help get you started with the likes of Dungeons & Dragons.

As revealed during PAX, Frosthaven will be interchangeable with the original Gloomhaven board game. To an extent, anyway. Namely, you can use Gloomhaven's characters in Frosthaven and vice versa. What's more, some of the first game's items will become available throughout the sequel. However, we're venturing into uncharted territory from there on in. This sequel packs more than 25 new enemies, over 100 new items, and roughly 100 new scenarios for good measure. Even the gameplay has been given a fresh coat of paint. For example, money is less important than resources this far north. More specifically, they'll be used to craft weapons via a shiny new crafting system.

Those resources will also come in handy when building a settlement of your own (complete with stickers and a map to represent your creation). The town of Frosthaven was almost destroyed in the attack that brought your characters north, so it's ripe for a spot of landscaping. And you'll want to give that a go, by the way; simply put, it'll help your party in the long run. Fixing an alchemist's shop lets you turn the herbs you've collected into potions, for instance. Just remember to keep your new home defended. Monsters may attack, and that's to say nothing of the march of time - each season has fresh challenges to overcome.

The six starter characters are equally refreshing. Leading the charge is the Banner Spear, your party's tank. This warrior uses formations with other characters to boost her attacks. She's joined by a menacing Drifter whose abilities must be charged, leading to a tense juggling act as you try to balance his cooldowns. Meanwhile, the roguish Blinkblade is able to manipulate time for a limited period, the Necromancer summons undead minions (but must use her hit points to do so), and the Deathwalker can manipulate the souls of slain enemies in combat. The Harrower may be the most interesting addition to the series, though; it's a horde of insects with two personalities fighting for dominance. As such, it's capable of switching between ranged and melee modes.

When you factor in the ten other heroes that have yet to be revealed, there's plenty to get your teeth into. Balancing each character's style should be a lot of fun, making this one to watch when it comes to the best cooperative board games.

You'll need fantastical abilities like that to survive, though. As the newsletter points out, something is very wrong in the frigid north. "There are Algox, the bigger, more yeti-like cousins of the Inox, attacking from the mountains, Lurkers flooding in from the northern sea, and there are even rumors of machines that wander the frozen wastes of their own free will. The party of mercenaries must face all of these perils, and perhaps in doing so, make peace with these new races so they can work together against even more sinister forces".

Don't want to wait until 2020? This isn't the only Gloomhaven-related release coming our way in the next year. As revealed in November, we're also getting a more accessible version of the game sometime late next year dubbed 'Gloomhaven: Jaws of the Lion' that revolves around a mercenary group of four adventurers.

It's intended to act as a bite-size introduction to the franchise, and Childres describes it as a "real game-changer, bringing a lot more people into the world Gloomhaven who may have been turned off by the commitment required by the original game". However, there will be plenty of new content for existing fans to enjoy as well.