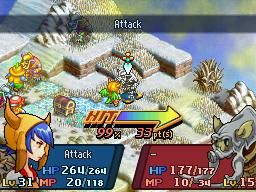 As for the story, it's pretty much nonexistent. You play as Luso, a kid who (again) gets sucked into a book to the magical land of Ivalice, where he decides to just hang out for awhile until he figures out how to get back. Joined by newfound friend Cid and a plucky thief named Adelle, Luso travels around looking for adventure and running into familiar faces (Vaan and Penelo from FFXII make guest appearances). Yes, it's disappointing and vapid, but it's at least kept to a bare minimum, and story portions never overstay their welcome with long chunks of boring dialogue.

But forget the story, because the battles are still the main attraction here. With a whopping 400 quests total, it's amazing that the gameplay never gets stale during the 100+ hours it's going to take you to complete A2. It's difficult to say if it's the best tactical RPG to date on the DS (both Advance Wars,Dual StrikeandDays of Ruinare strong contenders), but it's a definite improvement over what was an already great game on GBA.