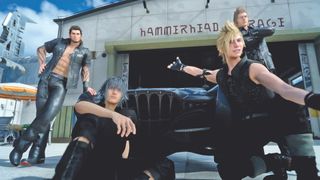 A new friendship simulator recently topped the charts, and its name is Final Fantasy 15. Developed in Japan by some people who’ve had at least 14 goes at making a game before this one (so you know it’s good), it’s about four boys with nice hair who ignore their destiny in favour of driving their car to industrial estates and stabbing the wild animals that they find there. Or at least that’s what happens in my version.

What everybody finds remarkable about this fantasy RPG is the achingly believable bond between these four badly dressed men, and how quickly that relationship is established thanks to some straightforward character introductions and a frankly terrible cover of Stand By Me. You’ve got Tall Wise Boy, who you desperately want to impress; you’ve got Buff Biker Boy, who is the big brother you never had; you’ve got Cute Idiot Boy, who you did that thing with once in summer camp and sometimes you wonder if he still thinks about it.

And then there is you, Standard RPG Boy, whose moderately cool hair and generic emo-backstory invite you to see the world through his eyes. You can have these friends. They were made for you. Exactly why this quartet d’amis works so well is part of the solution to this month’s Awful Gaming Thing, which is artificial intelligence, which is bad.

In video games, artificial intelligence is responsible for even more complex tasks. Characters must be clever enough to run in a straight line while avoiding tar pits, crocodiles and any jutting-out polygons. Soldiers must be able to hide behind statues in such a way that their foot sticks out a tiny bit, so you can still shoot them to death, and merchants must keep track of up to 256 different potions. Artificial intelligence is a measure of how characters respond to your actions and words. It makes them seem real.

Yet presently, artificial intelligence is in the doldrums. Characters routinely smear their faces against walls while running on the spot, or slowly recede into the floor while rotating and muttering, “Hmm, I could’ve sworn I just heard something”. Coding convincing virtual behaviours is difficult in the extreme, and most developers simply get tired shortly after designing more important character attributes like boobs and shoes.

Some games have managed to overcome this challenge. Alien Isolation solved it by diverting all of its artificial intelligence processing power to its one hulking great scaresmith, the Xenomorph, which had the unintended side effect of making every other enemy look really thick.

That was a fine solution, but it’s Final Fantasy 15 that’s made real strides in creating believable friends who live inside your television. Square Enix constructed its characters using an abundance of predetermined detail rather than free-acting brain-algorithms. Each time you make camp you’ll see different incidental animations. Cute Idiot Boy shares selfies of the gang while Tall Wise Boy serves up plates of vegetable stew. Standard RPG Boy quietly voices insecurities to a Buff Biker Boy on a beach at dawn, and sometimes you all team up to both stab and shoot a massive giraffe at the same time. The result is a truly meaningful exploration of young male relationships and largely needless animal death.

This is the way forward for games, using reams of hard-coded dialogue and motion-captured animation to create characters that are an inch-deep and a mile wide. They’re superficial on almost every level, but from an outside perspective, believable to anyone who doesn’t think too hard about them. Much like real life, am I right, men? Hah, men!