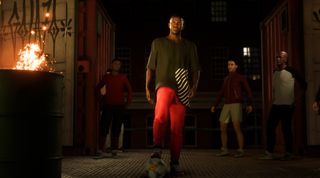 For years now, FIFA has been brilliant at the start of the yearly life cycle, but after a few months, EA usually implements a patch meant to fix some of the overpowered techniques but instead makes the game much less enjoyable to play. After spending some time with FIFA 20, I'm worried that this year's instalment may actually be regressing rather than making the strides forward that it needs to.

Picking up the pace

FIFA 20's lead gameplay producer Sam Rivera told me that one of the key areas of focus for EA Sports this year was around pace. The studio wants to prevent slower defenders from being able to catch up with fast attackers; something that I've found to be infuriating for the last few years. If you're a FIFA veteran, cast your mind back to FIFA 12. While it may well have been one of the best FIFA games of all time, it did have one glaring issue: pace was incredibly overpowered. Players like Seydou Doumbia, Jonathan Pitroipa, and Ignazio Abate were in most teams, despite the rest of their stats being unnoteworthy. This was because they were fast, and simply sprinting down the wings, cutting inside, and passing the ball across an open net was the meta way to play.

Hearing that FIFA 20 wants to make pace a focus again may strike fear into many, but EA Sports wants core-play to be reliant on more than the pace attribute alone. Dribbling is going to be just as important this time around, as a video played demonstrating how attackers with lower dribbling can be caught and tackled easier by defenders, while a high dribbling stat will still allow the attacker to beat them. All of this is part of EA's push to make FIFA 20 the most realistic football game ever.

After actually getting my hands on it however, I'm not certain that FIFA 20 is heading in the right direction. While the idea of making FIFA more realistic sounds great as a concept, realism does not necessarily make for a fun game. The middle of the pitch now plays considerably slower, for example, which means there's less end-to-end action and counter attacks are harder to pull off. For the first few matches I played, it felt like everybody on the pitch was running through mud except for my wingers – who when on the ball, played as you'd expect. There's a chance this could change ahead of launch, as EA Sports continues to tweak and refine play, but my initial impressions for 11v11 aren't great.

Running on the same engine

Volta, on the other hand, is showing far more promise. While this may look a whole lot like FIFA Street, Volta Football isn't a sequel. It may be street football, but EA Sports' goal with Volta is to bridge the gap between the street game and regular, authentic play. Their aim was to make the transition between Volta and 11v11 as seamless as possible, rather than how in the past, FIFA Street was a completely separate game and mechanics.

For the most part it works, because jumping in wasn't a difficult transition. While the 11v11 mode didn't feel like a step forward, something about Volta clicked much easier. It could well be because Volta is a brand new mode compared to the 11v11 I've been playing for almost 20 years, but the FIFA 20 engine makes Volta much smoother and more enjoyable to play in comparison. The only noticeable difference is how precise you need to be with the left stick; being slightly off target is killer on such a small pitch, whereas on a full scale field, it almost feels like there's some slight magnetism with your long range shots and passes.

It's almost impossible to score from range unless it's an open goal anyway, partly due to how accurate you need to be with the left stick, but also because of the new contextual defending. Simply moving a player between the ball and its destination results in an automatic block and animation, without any button input. It means you're almost always better off trying to beat the defender with skills and tricks rather than going for the long shot, even if you're pushed up against the wall.

Don't worry if that sounds intimidating to you because you struggle to pull off tricks in the 11v11 mode. Skills in Volta are much easier to execute; R3 + L3 will do a fancy flick to try and beat the player in front of you, while holding R2 + L2 as you move will automatically perform the best skill for the situation you're in. There's still a plethora of moves to learn with the right stick but this way, anyone can look totally rad. The simplified skills aren't great against competent players, but it allows you to familiarise yourself with the different moves.

Volta World and everything else

When it comes to the entire Volta experience, you have your own "Volta World". This is entirely built around your character; from the start, you create your Volta player the way you want. There's an entire suite of vanity items available to you, with countless more earned in-game through Volta coins and specific challenges. Fear not – creative director on FIFA 20, Matt Prior, confirmed to us in an interview that Volta coins will not be obtainable through microtransactions, everything in Volta can be earned by simply playing the game.

EA Sports was also keen to note that Volta isn't just a replacement for The Journey, but rather the next iteration of the FIFA package – which is all about you and your character, progressing through the world of street football. Unlike The Journey, which was one self contained mode, Volta will also receive seasonal content updates each month. Exact details weren't disclosed but expect more cosmetic items, challenges, that sort of thing. On top of that, there's also the Volta League which is modeled off the standard head-to-head seasons, and is played online. Pick your team, the mode you fancy, then play against other people in the usual FIFA format that sees you progress through the divisions.

While I only got to spend a short afternoon with FIFA 20, I find it difficult to believe that this will be an installment in the franchise that people rave about for years to come. There's still almost two months until release, so tweaks can and will be made, but my first impression is that FIFA 20 will follow the same fate as most other games that have come before it; a shaky start, then as players become more comfortable with the changes, a patch will come out and by the new year, only the most dedicated of players will still be playing week in, week out. Volta is promising, but I fear that it won't be good enough until the FIFA 21 or 22 version of the mode is available. With that said, I still can't wait to sink money into the joy sucking pit that is Ultimate Team, clinging onto the slim hopes of unpacking prime R9.

Make sure you read up on all of our FIFA 20 coverage, including our FIFA 20 Ultimate Team preview, FIFA 20 Matt Prior interview, and news about FIFA 20 Alex Hunter and whether he could make a return.