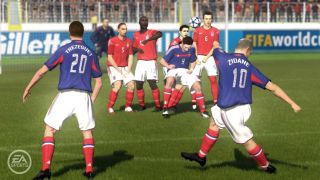 We saw several FIFA 20 confirmed features at EA's E3 2019 show, but plenty of questions about the upcoming sequel remained. EA addressed a few of those questions in a new blog post, outlining the game's reworked player creator, changes to Pro Clubs including new broadcast features and game modes, and perhaps most importantly, three returning positions: left and right forwards, left and right wing backs, and left and right midfielders.

In addition to new positions, FIFA 20 athletes can be assigned over 30 additional traits "that, if paired together with specialty traits, will allow you to take customization to the next level," EA said. "They offer increased benefits to your pro, but at an increased cost and a potential effect on other attributes." Similarly, EA says player stats like height and weight will player a greater role in FIFA 20. In the same vein, FIFA 20 will introduce a new avatar creation system - which will also be used in Pro Clubs - with more detailed skin and body shape options.

Looking at Pro Clubs specifically, EA confirmed that several new broadcast features and game modes will be available in FIFA 20. You'll have access to "replay transition wipes, an on-screen watermark, club banners and a new Pro Clubs logo," for starters, not to mention proper augmented reality overlays for big moments like half-time and goals.

Pro Clubs are also getting House Rules Cups inspired by the old Kick-Off Mode. House Rules Cups will add a new match type every day, with a new cup available every weekend. Oh, and a Pro Clubs practice mode is coming too, for those of you looking to pit yourself against maxed-out AI teams of 99-rated players.

Here are 11 FIFA 20 features that fans of the series - including us - would like to see added.