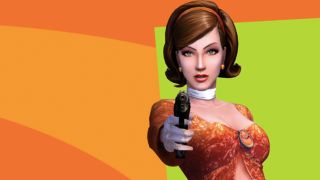 Rhianna Pratchett is an inspiring figure in the games industry, an acclaimed video game writer who has worked in some of the most popular franchises of the generation. While Pratchett has taken a step back from triple-A game development of late, opting to instead spend her time working on Lost Words – a beautiful and mechanically ambitious narrative adventure game featuring a young girl as the playable protagonist – there is one cult-classic game series gathering dust in an archive somewhere that would bring Pratchett back to big studio development in an instant.

No One Lives Forever

Pratchett famously wrote the scripts for Tomb Raider and its sequel, 2016’s Rise Of The Tomb Raider. They went on to not only breathe new life into the iconic Lara Croft, but also to make her feel like an actual human, rounded woman. The games achieved critical and commercial success, with Pratchett winning the award for Outstanding Achievement in Videogame Writing at 68th Writers Guild of America Awards in 2016, and in 2018 spawned a rebooted blockbuster movie starring Alicia Vikander, clearly influenced by Pratchett’s latest iteration of the character. This writer knows how to pen a winning reboot.

So when GamesRadar spoke to Pratchett about her innovative upcoming indie diary puzzle game, Lost Words: Beyond The Page, we also wanted to know which classic game she’d be keen to reimagine and turn her artful hand to next. “I would’ve said the Thief games, until I worked on a Thief game, and then that didn’t really work out as much as I’d like,” says Pratchett candidly, of her work writing the Steampunk-style story for the 2014 Thief reboot of the cult early-2000s fantasy game series, which was released to mixed reviews.

But after Lara Croft, there is another female protagonist who Pratchett would be keen to write. 2000’s acclaimed first person shooter The Operative: No One Lives Forever, and its hero, super spy Cate Archer: “Cate Archer in The Operative and its sequel [2002’s No One Lives Forever 2: A Spy in H.A.R.M.'s Way], with all her little spy gadgets and things like that. I think female spies are really interesting. I’d like to reboot Cate Archer, I think.”

Developed by Monolith Productions, published by (now defunct) Sierra Entertainment, and released in 2000, the story-driven, stealthy FPS was set in the 1960s, stylised like the classic Bond-style spy films of the era.

It's a long-forgotten classic, one of those games spoken about in whispers by those old enough to remember the turn of the century. The reason for that is because No One Lives Forever is stuck in a hell of sorts, with complications and confusion surrounding the intellectual property (IP) rights. This has ensured that the series is not only nigh-on impossible to play nowadays – it isn't available to purchase on any of the major digital publishing platforms – but also that any chance of it making a return is near impossible, given that Warner Bros., Activision, and 20th Century Fox are reportedly at war over the ownership of the IP. For No One Lives Forever to be revived, something massive would need to change.

Perhaps having a big name writer like Rhianna Pratchett on board could be what the series needs to give it a rehabilitating spy-gadget-shot of life back from the dead. At the very least, we know that Pratchett would be eager to keep the spirit of The Operative alive. In the early-Noughties games, you play as spy Cate Archer, whose spy gadgets were concealed as campy fashion accessories, “She had these lipsticks and powder compacts that would turn into secret weapons and gadgets,” remembers Pratchett, “I thought that was good!”

Giving thought to the possibilities that would bring, Pratchett confirms, “Female spy stuff, that’s very interesting to me.”Before any far-future plans though, Rhianna Pratchett’s upcoming indie puzzler, Lost Words: Beyond The Page will arrive this year. The innovative new game is set in the pages of a young girl’s diary, and in the vibrant fantasy world she writes about in it. She spoke to GamesRadar about how the creative new game gives us characters which are completely different to what mainstream games offer us – and why making it has been totally different to working on Tomb Raider.