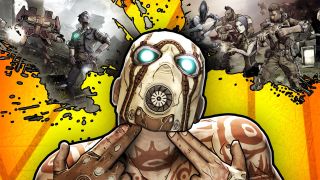 Great news for fans of Gearbox Software’s Borderlands series: Borderlands 2 is now available on SHIELD Android TV and SHIELD Tablet. By leveraging NVIDIA Tegra technology, the SHIELD version of Borderlands 2 offers gamers the same high-quality action RPG experience that has made the franchise so popular with fans worldwide.

Borderlands 2 is the second major installment in a long running series that has spawned multiple hit titles including Borderlands: The Pre-Sequel, which is now available on both SHIELD Android TV and SHIELD Tablet. The gameplay is a hybrid mix of first-person shooter and RPG elements that has proven immensely popular with fans. The franchise is also known for its strong storytelling and Borderlands 2 is no exception. It’s been five years since the events of the first Borderlands and Hyperion President Handsome Jack is promising to use the newly discovered element Eridium to bring peace to Pandora. Instead, he oversees a brutal and oppressive regime from his huge orbiting satellite space station. Against this backdrop, rumors of a second Vault begin to circulate, and a new breed of vault hunters converge on Pandora to search for it.

Borderlands 2 is huge in every sense of the word. Pandora now has many more locations to explore. While the first game offered mostly arid, desert environments, Borderlands 2 features a variety of locales including arctic regions, urban areas and caustic caverns. The new trading system also gives players who are linked up through the game’s multiplayer mode greater control over their inventories. They can swap items, buy and sell them and even use them to wager on the outcome of a duel. The newly discovered element Eridium can be also be used to enhance elemental powers and to purchase upgrades to your abilities.

While the new changes are excellent, Borderlands 2’s greatest strength is that it offers the same addictive gameplay that fans have come to love. The franchise’s unique visual style, high-quality voice acting and highly refined shooter-based gameplay are all on display

The Gang’s All Here

We can’t talk Borderlands 2 without mention its beefy roster of new vault hunters. These memorable characters come with some amazing new abilities that give the denizens of Pandora reason to look cautiously over their shoulders.

Axton is a commando who can deploy a Sabre Turret device to watch his back. He can upgrade the Turret with different weapons and abilities including rockets and a shield emitter. Axton is deadly in his own right but with his trusty Turret by his side, he can survive even the deadliest encounter.

Maya the Siren boasts a Phaselock ability that temporarily traps an enemy in another dimension, taking them out of the fight. This can be a huge tactical advantage in large skirmishes. Some enemies cannot be Phaselocked, but Maya can still use her ability to deal significant damage instead, making her a force to be reckoned with on the battlefield.

The Gunzerker Salvador is an absolute beast whose Gunzerking ability lets him wield two weapons of any kind at once. Players who choose Salvador can upgrade different attribute trees that let him deal more carnage and withstand more damage whenever his deadly skill is unleashed.

Finally, there’s Zer0 the Assassin. This stealthy stalker can call upon an ability called Decepti0n, which allows him to project a holographic image to confuse the enemy. Zer0 himself becomes cloaked, allowing him to move invisibly around the battlefield to take out the bad guys before they can figure out what is happening.

To date, the Borderlands series of games have sold millions of copies worldwide making it a bona fide hit. The incredibly enjoyable gameplay, stunning setting and memorable characters have earned Borderlands a legion of fans. And now SHIELD gamers can explore the vibrant world of Pandora on the best Android gaming device out there. Borderlands 2 and Borderlands: The Pre-Sequel are available to download now at a special sale price of $15 each for a limited time.