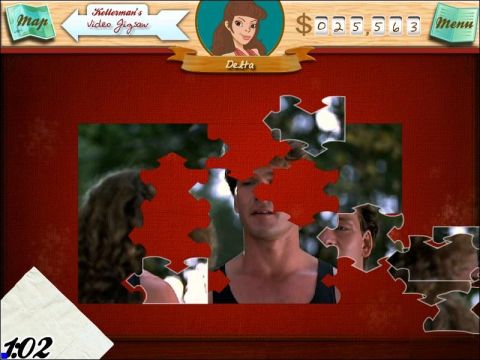 You%26rsquo;re expecting us to say %26ldquo;We%26rsquo;ve had the time of our life,%26rdquo; aren%26rsquo;t you? Probably %26ldquo;nobody puts Baby in the corner%26rdquo; too. Maybe something about a melon. It%26rsquo;s the only reason you%26rsquo;re reading this review. You don%26rsquo;t care if this rancid collection of minigames is any good or not. You%26rsquo;re just here for Swayze puns, you filthy slut. You do know the man%26rsquo;s currently dying of pancreatic cancer, right?

Fine, fine. Watch us dance for you. We haven%26rsquo;t had the time of our life. We%26rsquo;d rather be put in a corner than have to play this melon of a game ever again. We%26rsquo;d prefer to be ravished by Swayze than to endure another of its shockingly irrelevant minigames. Snap? Find the object? Match-3? We don%26rsquo;t remember any of those appearing at Kellerman%26rsquo;s. Still, it%26rsquo;s nice that we can spend the points we%26rsquo;ve earned on a polar bearskin rug for our house. A house we can%26rsquo;t do anything with other than stare at, a crude, static visualization of all the time we%26rsquo;ve just wasted.

Dirty Dancing is solely concerned with making the box look like the movie DVD and with Photoshopping blurry screencaps of cast-members onto playing cards, while a few token songs from the soundtrack repeat ad infinitum. The entire game is only 70Mb, but even so it takes longer to install the thing than it probably did to develop it. When we were young, our sisters all had a Dirty Dancing phase. We remember thinking at the time that the daily 40 minute journey to school, listening to a fraction of that damned soundtrack on our parent%26rsquo;s cassette player, was probably what hell was like. Now we know we were wrong. Listening to that damned soundtrack blaring out of our 7.1 speakers while arranging badly-drawn pictures of sandwiches into stacks of three - that%26rsquo;s much more like eternal damnation.