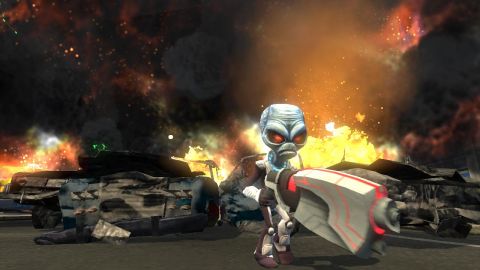 Destroy All Humans! Path of the Furon reminds us of the holidays. Unfortunately, it reminds us of Uncle Dennis, who used to show up unshaven and smelling of bourbon every Christmas, call grandma a slut at the table as a “joke,” then go home early to watch a fuzzy, black and white TV. It doesn’t know how it should look or behave, it can’t tell crass insult from actual comedy, and it’s perfectly fine being behind-the-times technologically.

DAH: Path of the Furon’s open-world gameplay is just good enough to demonstrate how good the game could have been, but definitely isn’t. Crypto has all of his trademark abilities: He can read or control humans’ minds, throw things psychokinetically with his brain, and freeze time. Add that to a huge arsenal of handheld weapons and a flying saucer that can level entire city blocks, and you have an alien who is well equipped to dominate the world via all sorts of different missions. And it starts off with Crypto facing off against ‘70s mobsters in a Vegas-type city before moving on to fake Hollywood, China and beyond. Which means fun for you, right?

Wrong. Most of Crypto’s fancy weapons are redundant, useless, or just not as good as your basic weapons. The open world is unneeded because there’s really not much to do other than the clearly marked missions. Speaking of which, the missions fall into only a few categories – shoot these dudes, bring me this many whatevers, melt this building, escort this guy somewhere – and become redundant too quickly. And the mini-games you’re forced into to unlock new landing zones for your saucer? Remind us why that’s worth our time?

Unfortunately, Destroy All Humans: Path of the Furon also seems to be suffering from “It’s four months from being close to finished, but let’s put it out anyway and put it out of its misery”-itis. It’s all just a little too low-fi for a 360 game, and it’s also packed with graphical glitches, choppy movement, buildings that pop into existence suddenly, blurry textures and just general sloppiness.

This brings us to the humor: There really isn’t any. Destroy All Humans! Path of the Furon’s awkward, sluggishly paced cut scenes are obviously aiming for dark, humorous satire, but they usually miss the mark completely. Instead, we get sophomoric, potentially offensive tastelessness, if not straight up racism. Even if one joke makes you smile, the next five will contort that smile into a pained grimace. It’s like going to a diner and waiting an hour for a burger that’s one bite of juicy beef and six bites flame-grilled cow patty. And frankly, that’s a meal we could do without.

Right about now, you may be thinking, “well, perhaps the multiplayer modes will still be worthwhile.” Nope. They aren’t. They’re just minigames. Avoid this one unless you’re a sucker for dickhead aliens. The Path of the Furon leads straight to disappointment.