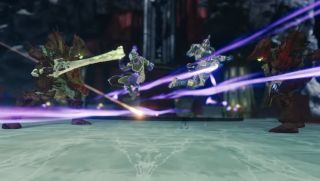 With the Destiny 2 Shadowkeep reveal and ViDoc, Bungie committed to turning Destiny 2 into an unabashed action MMO. We're getting a revamped armor system in the expansion, for instance, as well as new abilities called finishing moves. In a recent interview with Polygon, general manager Mark Noseworthy and franchise director Luke Smith shared more on what players can expect from finishing moves, including customization.

"When enemies get below a certain health threshold, they’re going to have an indicator that means they can be finished," Smith explained. All of the finishing moves we've seen thus far essentially boil down to punching or stabbing something really hard, so presumably you'll need to be right up in an enemy's face to *Mortal Kombat 11 voice* finish him. This makes finishing moves sound a bit like the glory kills in Doom Eternal, which sounds pretty cool.

You'll be able to customize which finishing move you perform, and what effects it has, using new mod slots on armor, Smith said. For example, successfully performing a finisher could give you and your allies some ammo. Looking at existing Destiny 2 mods and perks, it's a small leap to assume finishers could grant ability energy, health regen, or even a damage buff. It'll be interesting to see what modifiers are available. Together with artifacts, finishing moves could add a whole dimension to character builds and perk combos. The newly released Destiny 2 Bad Juju, which generates Super energy on kills, could be a great finisher enabler, for instance.

Using any finishing move will cost some Super energy, though Noseworthy says Bungie hasn't balanced out exactly how much. "At launch, you’ll only be able to equip one finisher, but we are working hard on multi-equip for them," he told Polygon, adding that the goal is to eventually create a "box of chocolates" roulette with variable animations. However, Noseworthy maintained that finishing moves are a work-in-progress, so they may look quite different by the time Shadowkeep launches on September 17.