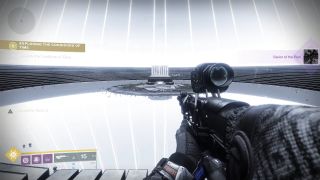 Destiny 2's latest puzzle has left the community at large scratching its head, but the game's top sleuths have worked out enough of its innards to track down a new emblem. Getting the emblem doesn't require a mathematics degree or hours of work, and it's a darn spiffy emblem, so you might as well nab it for yourself. Here's how to get the Savior of the Past emblem inside the Corridors of time.

To access the Corridors of Time, first enter the Sundial Mercury space - not the Sundial playlist - and activate the device rather than talking to Osiris. This will take you back to the Control-esque, Vex-filled annals you visited when saving Saint-14.

To claim the emblem, you'll need to take a specific path to reach the heart of the maze. As Sneaky Beaver explained on Twitter, that path is marked by the glyphs on the pillars in front of the various portals in each chamber. The correct path is:

1. Diamond (with three cuts in it)

Once you reach the final portal, you'll enter a large chamber with a coffin in the middle. If you're anything like me, your first instinct will be to run straight up to the coffin. Well, don't do that, and don't go back into the portal either, otherwise you'll be teleported out Instead, stop at the edge of the inner ring and hit the "Reveal" prompt. This will give you the emblem. Voila! We've still got a lot of puzzle left to solve, but at least it's something.