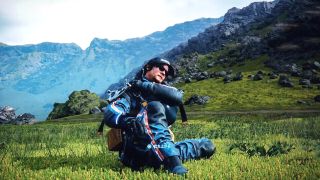 Hideo Kojima and the team at Kojima Productions are busy finishing up Death Stranding in time for its arrival in November, but at least their protagonist can still find time to relax. Kojima has beamed out three new off-screen images of Death Stranding on his official Twitter account over the last day and a half, and every one of them features main character Sam seated and chilling in different picturesque parts of Death Stranding's world.

I think Kojima might be envious of his fictional creation's freedom to sit down and smell the post-apocalyptic wildflowers. He probably only has time to work and Tweet pictures of food right now. At least he's not identifying with a lonely salaryman insect as much these days.

The first image shows Sam reclining in a field of dry grass. He's cradling his baby pod in his arms with one leg kicked up over the other. The button prompt - which is the only form of user interface visible in this screen - reads "get up" in Japanese.

The second image changes location to a black volcanic field stippled with orange dirt or lichen. Sam has his hood down as he cradles his baby pod, and the side-on camera angle offers a look at some of the gear he's toting on his back. The button prompt still says "get up".

The third image shows Sam at his absolute chillest, wearing a Bridges ballcap and a pair of sunglasses that are almost definitely licensed from some expensive real-life brand. He lets the baby pod hang from his chest as he massages his sore neck muscles. The button prompt now reads "stand up", though it could also be translated as "get up" like before. I wonder if we're seeing Kojima experiment with which prompt he prefers, or if the game is intended to show one of several different messages in this situation.

Kojima is set to appear at Gamescom later this month where he will "premiere an exclusive new look" at Death Stranding. Until then, I hope he makes time to sit down on a hill somewhere and just enjoy life with his own baby pod.

Check out the Death Stranding box art so you know what it will look like when you tear it open and cram the disc into your PS4.