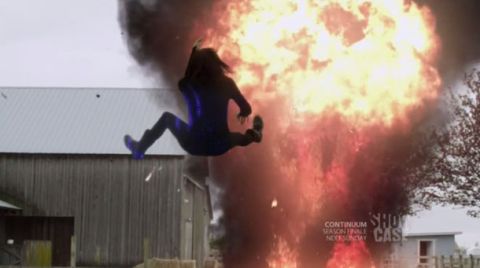 THE ONE WHERE A routine check on Alec's farm results in a hostage stand-off that ends up with Carlos being shot and Alec's step-dad dead.

VERDICT This is a tight, clever little thriller of an episode with some deliciously juicy action towards the end and some lovely character moments between Kiera and Carlos. For the first time she even comes clean with him, revealing her entire mission... although the silly bugger's too busy dying from blood loss to register most of it. D'oh!

There's one huge flaw, though. Alec's brother Julian has been an annoyance from the very first episode of this show, pouting and brooding like a teenaged terrorist version of Edward Cullen. He's such a one-dimensional cypher that when he returns at the end of this episode to help his dad, you really don't think much of his change of heart. Some more emotion from the actor might have been nice, or perhaps a few more signals earlier on that he isn't just a stereotypical bad guy. When his dad, Roland, tries to reason with him and gets all emotional, all you can think is, “Just shoot the ungrateful little oik!” It seems that Julian has a future, however, as he's clearly very important to Kagame... we can only hope he gets to be more of a rounded character in forthcoming episodes so we don't just dismiss him as a cliché.

The fact that the terrorists holding everybody hostage are teenagers is a nice touch; there's a funny moment where one of the teens says, “Good cake, Mrs Randol,” and she replies, “Thanks, Dan.” There's something really disturbing about seeing young lads walking around with so much firepower, and it nicely underlines everything that's wrong about Liber8's methods.

The flash-forward is interesting, showing that Kellog got mixed up with Liber8 simply because his sister worked for them. This explains a lot about his behaviour now – and he later forgives Kiera for getting both his sister and (in an earlier episode) his grandmother killed, saying she was just doing her job. How very open-minded of him. Although does he say that just to get into her pants? Hmm...

THE FUTURE IS EVIL We discover that Roland's farm went under because of the actions of a company called Vickerdale Enterprises. Kagame is talking about them in a podcast at the start of the show: in the future, they deliberately sow mutated crops into farmers’ fields to destroy their harvests, eventually controlling all of the farming in the country. That's actually rather clever! Also: boo, hiss etc.

ANIMAL MAGIC In the episode “Time's Up” we saw Kiera going gooey over a horse (presumably there are no nags in the future). At the start of this episode, we see that she's thrilled to pieces to be in the countryside and is delighted to meet another horse. She also enthuses over cows. The future really must be horrible if she gets excited over livestock .

IS IT JUST US, OR…? Was anyone else wondering how Julian could have bought such an enormous amount of fertiliser without his dad knowing about it? Even if Liber8 paid for it and it wasn't put on his dad's credit card, how did he sneak it onto the farm and hide it in the barn without being spotted?

FOOL ME TWICE Alec goes to see Kiera and Carlos with a first aid kit, then slips a tin of peas into it so he can knock out the guard on the way out. Later on in the episode, however, they let him hand over a bag full of towels (actually Kiera's suit) without checking it first. Did they forget he'd betrayed them so quickly? Not that it would have mattered if they'd searched it, though, as they wouldn't have known what Kiera's suit was.

YELLING AT THE TELLY Mistaken identity stories are always a little bit irritating: you want to shake characters by the lapels and tell them the truth. Which is why it's infuriating when Kiera, during her brief phone call to the police, explains what's going on but unfortunately leaves out the important fact that the teenagers are the terrorists and not the adults. This omission leads to Roland being shot dead. Next time, Kiera, say who the bad guys are first! Duh.

One thing we did notice, however: when she puts the suit on, she zips it up to the neck. Later in the episode the zip has dropped down to show just the right amount of cleavage to be all sexy. It's a good thing nobody shot her in the cleavage, isn't it?

SMOOTH-TALKING BASTARD Kellog makes a move on Kiera. “I'm married,” she says. To which he replies in his best smouldering tone, “ There you're married. Here you're alone. Like me. Tomorrow's not promised, Kiera. Maybe it's best to stop living for a future that might not even happen...” The scene then cuts away, but you can bet your bottom that Kiera and Kellog did the naked tango that night. Naughty, naughty! What would her husband say?

BEST LINE
Kiera: “Everything's going to be okay.”
Carlos: “You're a lousy liar. In spite of the lies, I still trust you more than anyone. Your name's probably not even Kiera.”