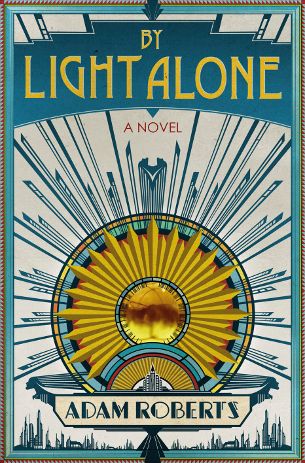 Is it possible for a writer to follow the precepts of Moore’s Law, doubling their capacity for excellence with every book? Probably not, but Adam Roberts is giving it a spirited try.

In By Light Alone , a rich family on holiday is rocked by the Madeleine McCann-esque abduction of their child. Roberts expertly dissects the inner lives of the people involved: husband George, wife Marie and stolen daughter Leah. The backdrop is richly SFnal, a future where the masses of humanity are barely sustained by photosynthesising hair, the rich scoffing what little food the tired Earth can produce.

Roberts cunningly pricks out the ridiculous shape of our society with wickedly sharp satire. Inequality and self-obsession are his targets, and yet he manages to hit them while keeping his characters entirely human and sympathetic. No-one does SF parables quite like Roberts, and as usual it’s all spun from the most amazing prose. Taken in isolation, his sentences here tend to the overly candied, but the effect of them en masse is hypnotically poetic. It’s brilliantly effective, and affecting.

Roberts’s SF novels are all worthy of praise, but there’s a certain majesty to By Light Alone - better rush out now and buy it, before the mainstream literary establishment sweeps Roberts under its wing and tells us he’s not aloud to play out with the nerds anymore. It’s hard for us sometimes to credit some of the claims made by PR, but when Gollancz calls Roberts one of the most important writers of his generation, it’s something of an understatement: this man puts art at the heart of our genre.