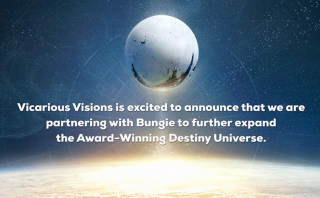 Destiny 2 anyone? There have been plenty of rumours floating around about Destiny's sequel, one of which was that Skylanders developer Vicarious Visions would be helping Bungie out.

That's now been confirmed via a tweet from Bungie itself:

Join us in welcoming Vicarious Visions to the party.https://t.co/w0EeVsjwhZ pic.twitter.com/q0VvzXeUpdDecember 8, 2016

Obviously that means all the other rumours are true. Probably. Supposedly the sequel will be a completely different game, expanding the current planets with towns, outposts and something described as 'play-in destinations'.

Obviously that sounds like a lot of work and when you look at other games like Call of Duty or Assassin's Creed and the global studios required to make them possible, it makes sense that Bungie are drafting in extra help. High Moon is  another Activision studio currently helping out.