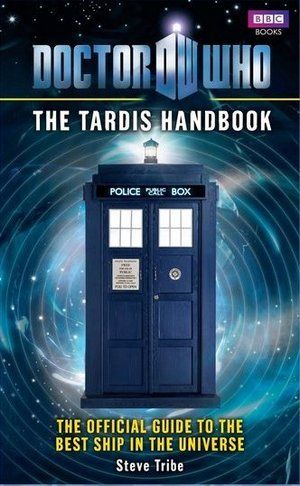 It’s a bit of a shame that Doctor Who Magazine recently ran a two-part feature on the TARDIS. That covered much of the same ground as this neat little book, and stole rather a lot of its thunder. Still, if you don't read DWM that won't concern you.

An ideal gift (Who fans might like to Wishlist it for Christmas), this pocket-sized tome (well, if you have capacious pockets…) features some impressively anal fanboy scholarship. It includes, for example, a breakdown of all the different TARDIS props used over the years, noting details like tiny variations in the wording on the sign, and changes in the shade of blue paint. There’s a five-page A-Z of every feature seen or mentioned over the years, from the Astral Map to the Zero Room. And there are all manner of geeky side-panels, like a list of everyone apart from the Doctor who has piloted the TARDIS, or all the beings that have managed to penetrate its defences.

One highlight is photos of all six panels of the new console, labelled with the functions allotted to them by designer Ed Thomas (what on earth is the "Fabrication" panel all about?). With short pieces on everything from the real-life Police Box to the Chameleon Circuit, and a run-through of all the rooms we’ve seen over the years, it’s perfect for dipping into for a quick browse. We suspect a lot of copies will end up sitting by the side of toilets...

It’s just a shame that the purity of the concept is diluted by including pointless “journey logs” for the first seven episodes of this season (the resulting embargo on sending out copies is the reason this review isn’t in the current issue of SFX). It’s as if someone started fretting that there wasn’t enough about the current season to draw in casual viewers. Steve Tribe has done his best to make these sections relevant (by including, say, script extracts that mention the TARDIS - however fleetingly), but they still feel crow-barred in, and because only the first seven episodes are covered, they instantly date the book. The space might have been better put to use printing more of the images (like the concept drawings for the cavernous TARDIS interior from the 1996 TV movie) at bigger than postage-stamp size.