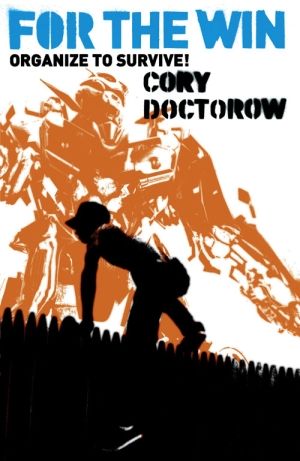 As the SF of earlier eras was full of right-wingers, contemporary SF has a surfeit of lefties, their fiction characterised by the charming idea that somehow we hairless apes will overcome our inborn hierarchical tendencies. Wishful thinking can make politicised SF of any hue a chore, and though politics is undoubtedly a more worthwhile use for SF than fantasies about world-mashing aliens, it’s possibly less fun. Or maybe it’s just that Cory Doctorow is upbeat, and we prefer our SF politics 1984 -dark.

Read Doctorow and you can see why the left has such a grip on the genre, for his arguments are coherent and pertinent. He’s not the genre equivalent of Michael Moore, who smugly hectors. Economics and the Information Revolution are Doctorow’s prime concerns (as they should be for all of us, frankly). Where previous book Little Brother challenged the surveillance society, and Makers examined new manufacturing models, For The Win details the unionisation of Gold Farmers in near-future online games. Read this and you’ll learn something – about Ponzi Schemes, Coase Costs and the outrageous behaviour of stockbrokers – as surely as you’ll learn how the telegraph works by reading Jules Verne. That’s an important part of SF right there. And as much as there’s a streak of sugary optimism in For The Win , with its activist teens empowered by tech uniting workers through games, at least Doctorow is exhorting us to act. He’s also weirdly pre-occupied with the way people’s breath smells, but that’s by the by.

Regardless of your own political views, what Doctorow writes is important, and his stories are fast-paced and informative, though his plots are too well-machined to be entirely convincing. Lastly, For The Win is worthy . Guardian readers will love it. Guy Haley