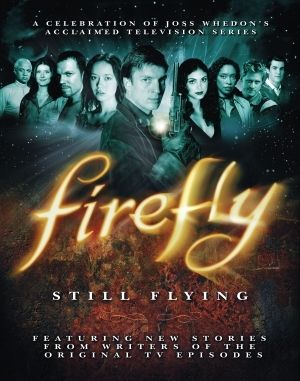 Look at the shiny things!

Eight years on from cancellation, is there anything new to say about Joss Whedon’s little-show-that-could? Well, a little. But not a lot. Certainly not by the cast, it seems, represented in this celebration by patched-together snippets of old online interviews and convention panels. A faint whiff of the second-hand inevitably ensues; the same goes for the likes of Jane Espenson’s short piece on writing for TV, first published on the Fox website in 2002.

Thankfully, most of the material is new (and what’s recycled is frankly credited as such). In the quest for fresh quotes, people further down the ladder are quizzed, like the stunt coordinator and the location manager. Then there’s the chief selling point: four new stories by writers for the series. Sadly, all are so slender they barely leave an impression.

No matter. The imagery trumps the words: concept sketches for the ships; on-set photos snapped by Nathan Fillion’s stand-in; stills of props, from the sickbay operating table to Wash’s toy dinosaurs. The most charming chapter recounts how Nathan Fillion kidnapped a soft-toy monkey belonging to the props manager, reproducing his ransom notes! It adds up to an inessential but intermittently fascinating compendium, a lucky-dip of makeweights and treasures.