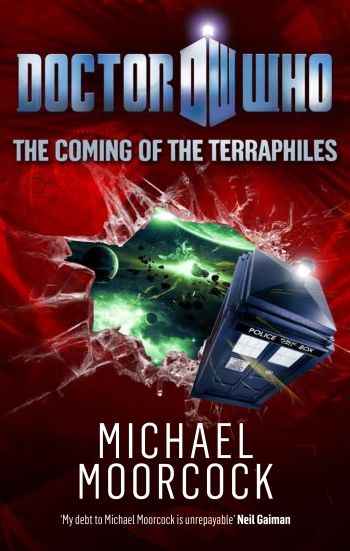 The Doctor pads up

There's a small but notable tradition of big name authors writing for Doctor Who - most recently Richard Curtis and Neil Gaiman, but also Douglas Adams, Stephen Fry (unfilmed), Kim Newman and Paul McAuley. And now here's fantasy icon Michael Moorcock, with the first of a new range of hardback Who novels by genre giants.

The Doctor and Amy are drawn to Miggea, and a quarter-millennial contest to win the fabled Arrow of Law. The Terraphiles, a group of alien fanboys obsessed with ancient Earth sports, are there and quickly rope the Doctor into joining their cricket team, The Gentlemen. Alas, there's more at stake here than afternoon tea and cucumber sarnies. If the Arrow falls into the wrong hands, then the entire multiverse is in danger...

The fear with this book was that BBC Books would slap a bucket-load of constraints on Moorcock, leading to a watered-down version of his indisputably weird talent. To their credit, they didn't. This is a Moorcock novel through and through: exhilarating, funny and deeply peculiar. It's stuffed with references to both the Whoniverse and his own sprawling oeuvre (Jerry Cornelius, the second aether and the Chaos Engineers all get a look in, amongst others) and Moorcock does a good job of capturing the Eleventh Doctor's wild-eyed enthusiasm and Amy's flirtatious tendencies.

It's not, however, for kids. While far from graphic, Moorcock's writing is ornate and verbose, and it's hard to imagine many youngsters (or more traditionalist Who fans) getting wrapped up in a demented PG Wodehouse pastiche.

But then, why should they have all the fun? It's been years since the Who range put out anything as smart and engaging as this. Fingers crossed it's the first of many such volumes.