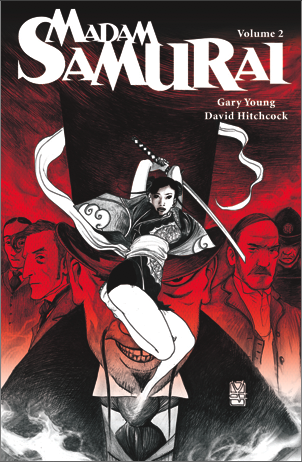 Written by Gary Young from an original idea by Gael McLaughlin
Art by Dave Hitchcock
Published by Scar Comics – £7.99 each

A young boy is orphaned by his parents’ honourable deaths in 19th Century Japan, and is adopted by his Shogun. This simple act of kindness sets into motion two generations of horror as the boy and his adopted older brother, Kazuo, clash over and over. Rivalry leads to tragedy, tragedy leads to war and finally, to a small, silent girl with vengeance in her heart and nothing but time. Kazuo’s murderous instincts become monstrous and out of control and he travels to London to slake his desires for money and blood. The girl follows, and blood is left in both their wakes.

Based on an idea by film producer Gael McLaughlin, Madam Samurai is the sort of high concept book that would step across to movies very easily. However, this isn’t a half-baked set of storyboards masquerading as a comic; it’s a detailed, considered piece of historical action horror. The lead, for all her silence, is one of the most expressive I’ve seen in recent comics, and her quest for vengeance is as understandable as it is horrifying. Likewise, Kazuo’s initial actions are completely sympathetic and it’s only as the story develops that these childish mistakes become murderous and final. By the time both he and the lead are in London he’s become a full-on monster, one very familiar to students of 19th century crime.

From Hell this isn’t, but it was never trying to be and its take on the Jack the Ripper killings is as effective as the Moore and Campbell classic, just from a drastically different stylistic approach. All the way through the two books, Young’s script never loses sight of this central, destructive relationship and neatly builds around it. The introduction of Sir Canning, a cheerfully drunken young Japanophile noble in the second book adds some much-needed comedy, whilst the gradual combining of the narrative with the facts of the Ripper case makes for fascinating, if disturbing reading.

Each beat of the script, narrative and emotional alike, is brought to stunning life by Dave Hitchcock. Dave is one of the best-kept secrets in the English comics scene, his Whitechapel Freak and Springheeled Jack series both bringing two of the Victorian period’s greatest nightmares into life in detailed, graceful, and often grotesque, life. His work here is arguably his best to date, the fluid savagery of the swordfights contrasting with a London bursting at the seams with people and life. Hitchcock’s character work is exemplary too, and he makes the lead a sympathetic, likable figure whose emotions are clear without ever having to speak. From quiet moments of reflection to a blisteringly fast swordfight to horse chase to sword fight on train, Hitchcock shifts gears as easily and fluidly as the warriors he’s depicting. Breathless without being rushed, precise without being stiff, this is some of the best art I’ve seen in a long time.

Madam Samurai is Victorian pulp adventure of the best kind. Blisteringly fast and intensely detailed it’s as focused and intense as its main character. One of the most unusual, and best, action comics you’ll read this year.