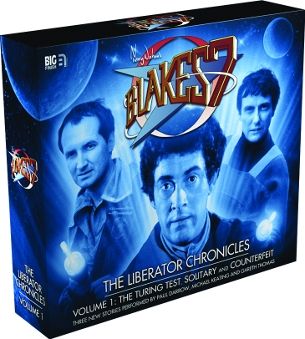 It may have had one of the most conclusive endings of any TV show (with virtually the entire cast perishing in a hail of gunfire), but the BBC’s SF adventure saga Blake’s 7 refuses to just lie down and die. Over the years, there have been various attempts at reviving the series. Now Big Finish have got in on the act with the first in a series of box sets, giving B7 fans the chance to once again follow the titular band of mismatched heroes in their battles with the evil Federation.

It contains three “enhanced’ audiobooks (featuring additional actors, sound effects and music). Each of this trio of tales is narrated by an original cast member – Paul Darrow as Avon, Michael Keating as Vila, and Gareth Thomas as Blake. The stories are all set during the show’s first season: Avon uses his lack of emotions to con a team of scientists; Vila has a dangerous encounter with a telepath; and Blake runs into serious problems when he tries to infiltrate a secret Federation-funded mine.

It’s all well-crafted retro space opera that captures the spirit of the series and its offbeat characterisation, with the interplay between Avon, Vila and Blake played as spikily as ever. Admittedly, there’s also a hefty dose of the show’s po-faced seriousness, but overall this set is an excellent start to the line. Fans of the show should consider it an essential purchase.