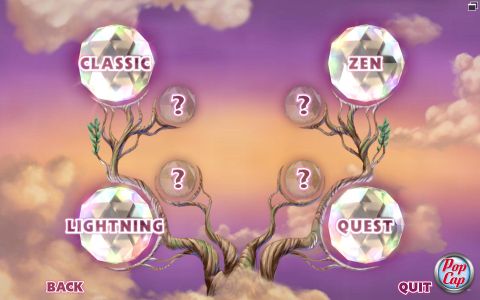 So, Bejeweled 3, eh? Really, all you need to know is that the core game of Bejeweled 3 is nearly unchanged from the Bejeweled formula we all know and love. As you'd expect, the meat and potatoes of Bejeweled 3 is the untimed classic mode, a straightforward affair where you match gems until you run out of moves. Lightning mode probably ranks second in the hierarchy, which is more or less a timed version of classic mode. Where Bejeweled 3 really pulls out the stops is in its abundance of secondary modes that all play off the classic gem-swapping formula.

Above: Detonating a star gem

As much as we love Bejeweled, it does get old after awhile, and as mentioned above, Bejeweled 3's classic mode isn't remarkably different from Bejeweled 2's classic mode. That's not necessarily a bad thing, and we don't want every iteration of Bejeweled to be totally different like Bejeweled Twist was (which is also awesome in its own way), but our only caveat is that if you're already sick of Bejeweled 2's classic mode, nothing in Bejeweled 3's classic mode will feel all that fresh to you. The biggest difference is the addition of the star gem, which you get from forming a same-color set of five gems in a T or L formation. When you match a star gem, it clears all the gems in its row and column. Adding one gem type doesn't change the overall feel of the game though, even though it's a nice addition that does add to the gameplay a little.

Because of said sameness, Bejeweled 3's new modes definitely drew our attention away from classic mode. There are eight modes in total - Classic, Lightning, Zen and Quest are the primary modes that are familiar from Bejeweled 2, with Poker, Ice Storm, Butterflies and Diamond Mine filling outthe brand-newmodes -and together they offer a good mix of both timed and untimed variations. In Poker mode, for example, you get five turns to make a poker hand, and the color gem you match each turn gets counted as a card in your hand. For example, if you match orange three turns and green two turns, you've got a full house. As you progress, easier hands like single pairs become off limits, and you have to fight to stay alive by creating the best hands possible.

Butterflies mode is also a cool twist, where special butterfly gems appear at the bottom of the screen and move up one row each turn, and you have to get rid of them before they reach the top and get eaten by a spider. It's addicting and tense (definitely the tensest of the non-timed modes) and requires developing a whole different strategy.

Quest mode combines all the other modes and adds a handful more of its own minigames, and works kind of like the challenges in Peggle. Quests get more difficult as you progress, like having to clear a specific number of gems off a classic board in a limited number of moves, where the number you have to clear gets higher each time as the moves you're allowed gets lower. It's a great way to stretch your Bejeweled skills, and it works especially well because it offers a bite-sized, finite version of the game so that you can walk away before your eyes glaze over and you get sick of looking at gems.

Above: In Ice Storm, you have to create matches as fast as you can to push the freezing water down before it reaches the top

How much you get out of Bejeweled 3 is ultimately going to depend on how much swapping colored gems on a grid still appeals to you. If you played Bejeweled, Bejeweled 2, Bejeweled Blitz, and the Puzzle Quest series, we wouldn't blame you if you decided to sit this one out, despite Bejeweled 3 being easily the most robust entry in the series to date. Right now PopCap is offering a60 minute free trialonits site, so if you get through the whole 60 minutes and still feel the need to match gems, that's probably a good indication that it's worth the purchase.