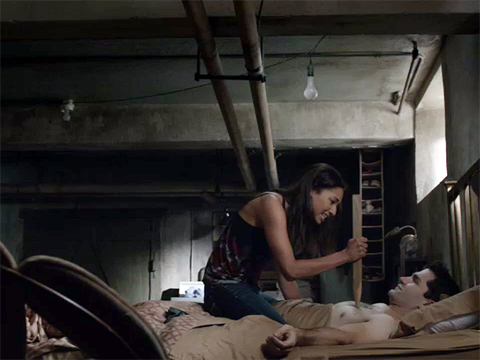 Being Human USA 3.04 “I’m So Lonesome I Could Die” TV REVIEW

THE ONE WHERE Nothing much happens

VERDICT Another sub-par episode. I’ve been telling anyone who will listen that the US version of Being Human is at least as good as – if not better than – the UK version, but on the strength of this, and the last couple of episodes, it’s getting harder to justify those claims. The dialogue is strong, and the performances are top notch, but there just seems to be too little actual plot happening.

Josh’s ongoing deliberation as to when to ask Nora to marry him is getting a little stale, now – but at least Nora has hinted heavily that she’s not ready to hear that question, yet, so we hopefully won’t have to suffer that any more. It was good to see Nora’s family for the first time. They’re not the monsters she painted them as, but you probably still wouldn’t want them in your life. Nora’s brother, RJ, likes them young, it seems, and flirts with Erin, who doesn’t exactly hold him at bay.

Sally keeps dreaming about meeting – and killing – people from her past, and when Erin suggests that she just leaves Boston, Sally appears surprised that she never thought of it, herself. As well she should. It’s clear by the end of the episode, however, that she has no intention of leaving just yet.

Aidan has evidently tired of (un)life, and is drinking the blood of people without first screening them. When Sally and Aidan visit a biker bar for a night out, their (too short) dance to a swing number is the highlight of the episode.

When RJ visits our heroes’ house and Nora leaves him alone with Erin, it’s pretty obvious they’re going to end up in her room. Josh discovers them, and channels his inner (missing) wolf. Erin’s abscondment at the end of the episode comes as no surprise. Ah, let her run – she’s annoying, anyway.

A nice set-up at the end, though, when Aidan (back at his old job at the hospital) is introduced to “Bubble Boy” – a young lad with severe combined immunodeficiency, and who will surely die if he ever comes into contact with a germ. A nice source of pure blood if you can get away with it…

Oh, and Nora killed Brynn, apparently. Let’s hope that Brynn’s dad comes back soon to liven things up a bit…

NICE IDEA BUT… The brief swing number between Sally and Aidan worked well, but it’s stretching credibility a little to think that a biker bar would even have this available in their jukebox selection.

BEST LINES:
Aidan: “Technically, the right thing to do would be to ask her father’s permission.”
Josh: “Wow! And then demand a cow and a chest full of silks as a dowry.”

• Read our other Being Human USA reviews