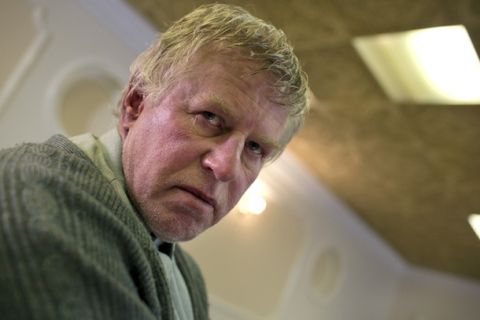 Being Human 5.01 "The Trinity" review : The Beast (erratic), Marigolds, hotel

THE ONE WHERE A new vampire is sired, the Men In Grey get shut down, and Hal and Tom get jobs in a hotel with a very special tenant…

VERDICT Being Human returns with an episode whose only significant weakness is that it’s tasked with an awful lot of heavy lifting; launching numerous story strands and setting up a new triumvirate of terror, it inevitably feels a little unfocussed. Still, that’s in the nature of opening instalments, and all those different plotlines certainly have great potential.

The most significant of those three antagonists, of course, is the revolting Captain Hatch, revealed – in a jaw-dropping conclusion - to be the Devil trapped in human form. Making Old Nick himself your Big Bad is fraught with danger – how can anyone possibly hope to defeat evil incarnate? The obvious solution is to limit his powers.

The backstory presented here doesn’t entirely convince, to be honest. The “werewolves and vampires are like chemical compounds” analogy feels rather strained, for one thing. Surely Satan has other sources of power – like the evil thoughts and sinful deeds of millions of human beings? And if he’s been trapped in human form since 1918, shouldn’t the world have become a considerably nicer place? Maybe Hatch isn’t The Devil but simply a devil, or one aspect of the Devil. It’s probably best not to think about it too much, and one suspects noone will give a hoot about such rationalisations once Phil Davis really gets into his stride. He only has a few moments to show what he can do here, but what little we do see is pretty chilling.

The second new arrival is perhaps even more promising. The newly-sired Ian Cram (aka Crumb) is a particularly nuanced take on vampirism, and standup comedian Colin Hoult’s performance is by turns amusing, sympathetic and chilling. We can probably predict how the Devil himself will behave, but guessing how this newt-keeping Colin Hunt type will take to his new powers - and how his story will interwine with others’ – is much more difficult. If we have any complaints here then, again, they’re to do with the details of the character’s genesis. We’re offered a rationale for why Hal turns Cram, but it’s pretty difficult to swallow. The same goes for Alex’s decision to let him go – she may be pretty new to this supernatural business, but releasing a vampire into the world without even consulting Tom first is gross stupidity.

As if being given two fascinating new characters wasn’t spoiling us enough, a familiar face is fleshed out. Steven Robertson gives Davis and Hoult a run for the money in the Best Performance stakes as politely-spoken, steely-eyed Man In Grey Dominic Rook, who provides the episode’s stand-out moment as he calmly stabs an eye witness to death with a ballpoint pen (someone’s been watching Joe Pesci in Casino …) Mind you, it is rather disappointing to discover that the Men In Grey are just another under-funded Government department, one vulnerable to something as mundane as budget cuts - we’d rather assumed that (like Torchwood) they were above such petty structures. It’s surprising that they don’t know all about Hal, too – suddenly they’re starting to look a lot less impressive. Still, loving the “Men In Grey” music, with its echoes of John Barry’s theme to The Ipcress File (appropriate, given that that film also portrayed a secret department in rather prosaic terms).

Three fabulous villains then, all jostling for attention, and it’ll be fascinating to see if and how their pathes intersect. But the main cast aren’t neglected either, with Kate Bracken benefitting the most. In an episode where some of the character motivation seems a little questionable, Alex’s continuing struggle to deal with her own death stands out. Given how much time has passed since her on-screen demise, it would have been a simple matter to move on, but Alex’s despair and anger are perfectly judged and beautifully played.

TOPLESS HAL WATCH It takes just 22 seconds from the start of the episode proper before we see Damien Molony with his shirt off. Surely a record?

NITPICKS Not only is it remarkably easy for Alex and Tom to break into Men In Grey HQ (don’t they have guards, or security cameras?), but it’s the work of seconds to find her personal file.

THE SHOPPING LIST Should you wish to emulate Captain Hatch’s interior design style, the prints on his bedroom wall are Hieronymus Bosch's "The Garden Of Earthly Delights" (the right panel of which depicts the torments of damnation) and MC Escher’s “Relativity” .

BEHIND THE SCENES When we see Hal and co walking through the front door of the Barry Grand (with the sea visible behind them), that’s not a real location – it’s a bit of set that was set up on Barry seafront.