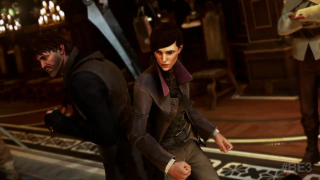 Even if you enjoyed Dishonored, there's a good chance you missed out on its two-part DLC campaign. Come to think of it, Knife of Dunwall is actually sitting in my backlog right now… And Dishonored 2 creative director Harvey Smith hopes we rectify that oversight before getting started with the new game in November.

"I'm not just saying this because I want people to buy our game, but I really hope people play the [original game's] DLC," Harvey Smith told me at QuakeCon. "Dunwall City Trials are fun challenge modes, but The Knife of Dunwall and The Brigmore Witches are really good chapter pieces after we had really figured out the game. So they're better in a way.

"And they also were a step toward where we went with Dishonored 2. There are more women in interesting roles than the narrow roles they have before. We really understood our world. And it's a bridge, in a way, to the new content."

The DLC campaign follows Daud, who was last seen being spared or killed by Corvo for assassinating the empress. Aside from filling in the story from Daud's perspective and introducing characters like Delilah (who looks to be a central villain in Dishonored 2), Smith said the expansions were where Arkane Studios first experimented with a voiced main character - both Corvo and Emily have voice lines in Dishonored 2 - and tried out some of the tweaked powers that have further evolved for Corvo's campaign.

Lore implications aside, "I really hope people that are just into the action part, I hope they play - as a like an appetizer - I hope they play Knife of Dunwall and Brigmore Witches," Smith said. He also helpfully pointed out that they're both included with Dishonored: Definitive Edition.