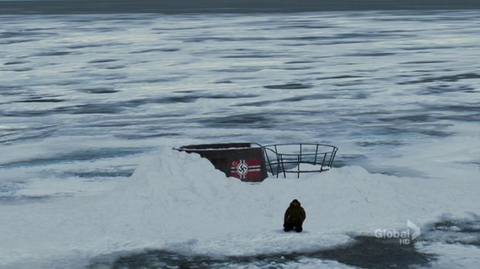 THE ONE WHERE (Deep breath…) In 1938 the Rosicrucians frantically work to finish 12 mysterious clocks and hide them from the SS. In present day New York, Hank Galliston, editor of Modern Skeptic magazine, is horrified to receive a phone call from his wife Laila as she’s being abducted by infamous terrorist White Vincent. With the help of his intrepid reporters Arron and Rachel, old friend Father Mickle and Rebecca Riley, the world’s most sceptical FBI agent, Hank battles to rescue his wife and understand why the mysterious clock she bought that day seems so important…

VERDICT Zero Hour is almost certainly going to burn out inside one season, but holy WOW what a season. More happens in the space of the first three scenes here (Nazi clone babies! Rosicrucians! Possibly magic clocks! The end of the world!) than some shows manage in an episode and that’s a massive plus given the tendency a lot of conspiracy shows have to spin stuff out. Witness the off-hand way The X-Files finally revealed its central plot. Or my personal favourite: exactly how many fricking episodes it took Sayiid to mention that big thick power cable he’d spotted in Lost . Conspiracy shows have been defined, for years, as being more about the withholding of information than the rapid unpacking of it.

Zero Hour , by contrast, spends its first episode grabbing you by the lapels and yelling the awful truth YOU NEED TO KNOW NOW OR WE’RE ALL DOOMED! DOOMED! It’s like that bit at the end of the original Invasion Of The Bodysnatchers with Kevin McCarthy yelling, “You’re next! YOU’RE NEXT! YOU’RE NEXT!” at the audience, only it’s the entire show and its yelling straight at you.

This is not going to make some people happy. Neither is the fact that Zero Hour is a show which has a fleeting relationship with both character and quieter moments. Aside from Hank, played with the same quiet authority Anthony Edwards brings to every role, and White Vincent, played with scenery chewing enthusiasm by Michael Nyqvist, it’s difficult to remember anyone else. That being said, there is some nice groundwork being laid here, and I’m hopeful that Rachel and Arron (played by Addison Timlin and Scott Michael Foster respectively), Hank’s two cub reporters, will flourish into a second-string double act for the show. Likewise, Carmen Ejogo as Agent Riley turns in a smartly peppery performance, just belligerent enough to make you doubt her. Every time she and Hank spar, you can feel the writing lift, so there’s plenty to work with there, it’s just buried beneath countless levels of conspiracy and exposition. It’s also always a pleasure to see Charles Dutton, turning up here as Father Mickle, an old friend of Hank’s who, conveniently, knows a lot about the section of history they need him to.

As for quieter moments, there’s just no room for them and the show threatens to come apart a couple of times as a result. We barely get a sense of Hank and Laila as people before Laila’s taken (And there’s something odd about that too – more below…), and from that point on everyone is defined by the search for Laila and White Vincent. I’m not asking for endless introspection or angst, but it’d be nice to have a quiet scene or two to see these people catch their breath. Shows like this live and die on two things; the glorious lunacy of the central idea and how much we care about the characters. Zero Hour ’s doing great on the first and needs to do a lot of catching up on the second.

That being said, hot damn this is a fun show. It hits the ground running and doesn’t stop and every time you think it’s hit a peak of pure pulp joy, and surely that’s the end, another one comes along. It’s vast in ambition and scope and will make The Da Vinci Code or National Treasure fans (and people who don’t like to admit they enjoyed either) very happy. If it can just calm down, a little, it’ll pick up a lot of other people on the way too. But the clock’s ticking. Literally…

THE AWFUL TRUTH In 1938, the Rosicrucians realised that the world was in terrible danger and appointed 12 new apostles who would save the world. Each was given the name of one of the original apostles and a clock, with details encoded into it that would be vital in their task. They were also told the true nature of the huge object hidden beneath the Rosicrucian chapel.

The clocks were completed at the same time as the Nazis apparently perfected immortality, giving rise to children with entirely white eyes.

A contact in the SS warned the Rosicrucians that they had been located and the order gave their lives to buy the clocks and the object time to be evacuated.

One clock surfaces in New York in 2012, and White Vincent, an infamous mercenary, risks crossing US borders to kidnap it’s last owner, Laila Galliston. However, on opening the clock, her husband Hank and his reporters find a diamond inside, encoded with a map that, when translated, points to New Bartholomew. Later in the episode, Hank’s reporters Rachel and Arron track down the clockmaker who explains that the map doesn’t point to a place, it points to a person; the New Bartholomew, one of the 12 apostles…

UNANSWERED QUESTIONS Is White Vincent one of the original Nazi babies? If not, is he one of the dead men on the U-boat? Are White Vincent and Hank clones? Who cloned them? Who placed them in their new lives? Does Hank have white eyes? How does White Vincent know who or what Hank is? Why is Hank so grumpy around Federal agents? Why was New Bartholomew sent to the Canadian tundra in a U boat? Who executed everyone on board the U boat? Why does Hank look exactly like New Bartholomew? Where are the other apostles? What is Zero Hour? What was the prophecy the Rosicrucians realised was coming true? Who is White Vincent working for? And one more…

TANGLED WEBS Why does White Vincent take Laila with him? Look at that scene again: it’s shot in a way which screams, “We’ll be coming back here!” You see Laila grab the spike, see the office she’s already in looking turned over, see Vincent outside and then… he’s dragging her out into the car? If Vincent knows about the children with white eyes it makes sense other people do. So, wacky theory of the week: Laila knows everything, orchestrated all the events we’re about to see for some reason and is actually White Vincent’s boss. Or, possibly, a Nazi. Or possibly both.

IT’S WOSSINAME! Once again we have a cast full of notables, so, deep breath and…

• Anthony Edwards is best known for playing Goose in Top Gun and Mark Greene in ER and, in doing so, cornered the market in lovely, but doomed guys, for almost 20 years. He also appeared in the Thunderbirds movie, The Forgotten and is one of the two leads in one of the greatest movies about nuclear war and romance ever mad – Miracle Mile .

• Michael Nyqvist is best known for playing Mikael Blomkvist in the Girl With The Dragon Tattoo movies. He also recently had a very fun turn as the bad guy in Mission: Impossible – Ghost Protocol . He also has a role in upcoming found footage space horror movie, Europa Report .

• Charles S Dutton is best known in genre circles as Dillon in Alien 3 . However, he’s also appeared in Are You Afraid of the Dark (Submitted for the approval of the Midnight Society! Woohoo!), Se7en , Homicide: Life On The Street , Oz , Mimic , Gothika , Secret Window , Threshold (mournful bugle salute, moment of silence), Legion and American Horror Story . He was also Captain Cross in the unaired Powers TV pilot that is apparently being retooled once again.

• Carmen Ejogo’s second professional acting job was playing Blinda in the flawed but interesting science fiction (ish) mini-series Cold Lazarus by the late Denis Potter. She also appeared in movies like Pride and Glory and Away We Go , TV shows like Chaos and most recently in the big-screen reboot of the Alex Cross movie series called… Alex Cross .

• Scott Michael Foster, who plays Arron is a TV veteran, most notably to genre fans for his role as Jonas Beckett in The River . However, he’s also appeared for an extended run on Californication and had guest spots in Law And Order: Los Angeles and The Closer .

• Jacinda Barrett who plays Laila Galliston, appeared as Medea on Hercules: The Legendary Journeys , Taylor Watts, daughter of Peter Watts in Millennium and recently appeared in several episodes of Suits .

• Addison Timlin is another TV veteran, and like Charles S Dutton, appeared in a show that never even made it to air, in this case the actually rather interesting looking Day One . She also had an extended run on Californication and made a single appearance on Law And Order: Los Angeles .

BEST LINES
Hank: “ Modern Skeptic is not sending you skunk aping in Arkansas.”
Arron: “It’s not as dirty as it sounds.”

Zero Hour currently airs in the US on ABC on Thursdays. No UK broadcaster as yet