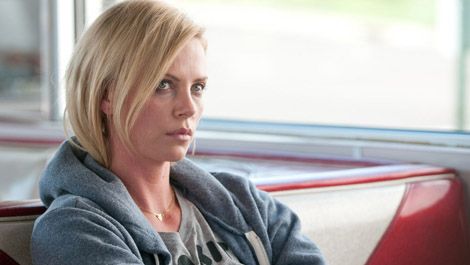 Jason Reitman likes difficult protagonists: tobacco lobbyist Nick Naylor in Thank You For Smoking , or corporate downsizer Ryan Bingham in Up In The Air . Yet Young Adult ’s Mavis Gary is something else altogether – a “psychotic Prom Queen bitch” turned tween-fiction author who returns to her Minnesota home town intent on stealing her high-school sweetheart away from his wife and baby.

This isn’t the sort of person we’re usually encouraged to root for in a mainstream feature. Props to writer Diablo Cody, then, for shaping one around such a divisive character, and to Charlize Theron too for bringing her to gloriously awful life.

As if in training for her Evil Queen role in Snow White And The Huntsman , Theron revels in her selfish actions and waspish, un-PC sentiments.

Yet the Juno scribe takes pains to show they’re less the machinations of an immoral adult than the impulses of an arrested adolescent, who might have stepped off the pages of the ‘Waverly Prep’ books she’s paid to ghost-write.

Don’t judge her then, Cody seems to be saying, as she makes a play for happily married Buddy (Patrick Wilson). No, the right response is to ape another of her former classmates, crippled barfly Matt, and take a ring-side seat as she crashes and burns. Winningly played by Patton Oswalt, misfit Matt serves as the picture’s conscience.

Yet he’s also the closest it has to a hero, the hate-crime beating he suffered giving him a noble stoicism set in sharp relief to Mavis’ self-absorption.

Harpies tend to be sidelined in movies, so the fact that Adult snubs that prim template is reason enough to check it out.