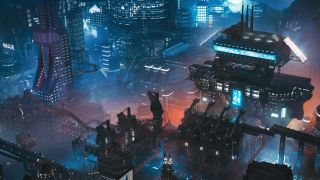 We're still several months away from Cyberpunk 2077's April 16, 2020 release date, but this Minecraft build just might hold us over. YouTuber Elysium Fire dropped an eight-minute video showing the entire build process of the "Cyberpunk Project." The video serves as a kind of trailer for the map, which will be available to download on Christmas Day. Check it out below.

Since the full Night City map from Cyberpunk 2077 has yet to be released, this Minecraft build is not an exact replica, but an homage that was built by a fairly massive team (which may be why no two buildings look identical). Despite the size of the team and the scope of the project, the Cyberpunk Project has created a beautifully cohesive, neon daydream of a metropolis, one that I'm itching to explore. Considering the team only had snippets of trailers and demos for inspiration, the sheer scope of this city is pretty darn impressive.

The city includes a monorail, a wind farm, a port, hulking megastructures, an industrial sector, a purification plant, and a ton of glittering billboards and holograms. It's wild to see it take shape and mind-blowing when you consider how much work went into this build.

The Cyberpunk Project will drop as a downloadable map on December 25, so sneak away from the political discourse over Christmas turkey and escape into a futuristic city. Keep an eye on the ElysiumFire Twitter account for more in-depth updates.

Still itching to get your hands on CD Projekt Red's game? Us too. We do know that Cyberpunk 2077 will be shorter but more replayable than The Witcher 3, so it'll be worth the wait.