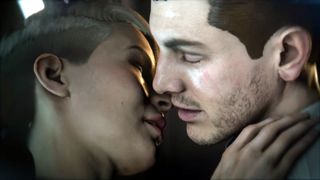 We've crunched the numbers and finally have our official answer to the age old question of "which Mass Effect: Andromeda companion will you date first". Thanks to nearly 10,000 votes from our star-crossed readers, one victor has finally emerged in a holo-finish: Cora Harper, biotic commando and second-in-command of the Andromeda Initiative's human Pathfinder team.

Cora was neck-and-neck (not in the romantic sense) with Peebee for nearly the entire length of the poll, both jockeying back and forth at 28 percent of the vote. But Cora finally managed to pull ahead in the end, securing a slim-but-decisive victory at 29 percent. Turian mercenary Vetra was their closest competition, crossing the finish line with 19 percent of the vote for most-desired companion (definitely in the romantic sense).

If Cora turns out to be the Illusive Man's daughter, I'm predicting a whole lot of awkward conversations in the future. Just saying.

The new launch trailer for Mass Effect: Andromeda shows Alec Ryder cuddling up with Peebee, while a pre-poll trailer showed him gettin' his smooch on with Cora, so it will be interesting to see if the power of suggestion changes those odds once the full game is released. As for me, I'm still holding out for my meet cute with Drack.