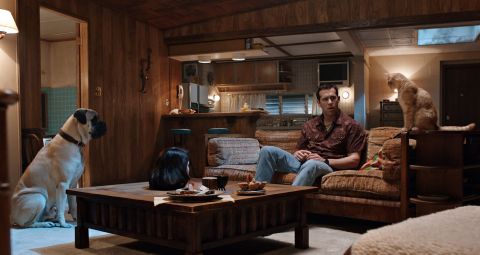 Reynolds moves on from Green Lantern in Satrapi’s psycho-romp, pitched awkwardly between funny-haha and funny-peculiar, but blessed with enough style and smarts to merit a look.

Second chances are rare for falling stars in Hollywood, but Ryan Reynolds may just be carving one out. He’s hiking the route to Hollywood peak again: before mouthy merc Deadpool, you can see him in off-piste indies like Mississippi Grind and this surreal psycho-satire about potty-mouthed cats and killing.

The serial-killer market being busy, comic-book artist/Persepolis director Marjane Satrapi does well to hack out fresh turf here – until the trying-too-hard stretch marks show. But there are no quirk stains on Reynolds, who pins down his best role since 2010 as Jerry, a dork-ish bathroom-factory employee who’s just that bit too perky for comfort. Jerry has issues. Worse still, he has a sweary Scottish moggy-most-horrid named Mr Whiskers (voiced by Reynolds, seemingly mimicking Peter Mullan), who argues intently that murder is in Jerry’s nature after he sort-of-accidentally kills (then chops up) boisterous factory temp Fiona (Gemma Arterton).

With every beat pitched subtly ‘off’ without collapsing into geek-freak caricature, Reynolds finds that sweet spot where excessive sincerity can spook, whether complimenting a (balding) co-worker on his hair or straining to blend in. His co-stars are equally on-key. Arterton spikes her good-time gal’s brassy cheer with bite, and Anna Kendrick brings sweeter depths to her co-worker Lisa, whose meekness throws Jerry’s madness into perspective: while his neediness harbours demons, hers is a by-product of innate niceness. Animal Kingdom’s Jacki Weaver nails every note too, in a small but pivotal role as a therapist.

The problem is that the right directorial key eludes Satrapi. Working from a tricksy script by Michael R Perry (Paranormal Activity 2), she evokes Jerry’s off-his-meds mindset with a heightened sense of reality, where pink overalls dazzle and butterflies hover around Fiona, Amelie-style. But Satrapi struggles to find other tones.

The cod-psychology flashbacks to Jerry’s upbringing and trad-thriller end-stretch make you wonder if you’re watching a splatter-gun small-town satire, Psycho in art-trash drag or just the whole, blackly comic lot mashed up without a map. But at least Reynolds looks like a man finding his way to take risks once more.

Reynolds moves on from Green Lantern in Satrapi’s psycho-romp, pitched awkwardly between funny-haha and funny-peculiar, but blessed with enough style and smarts to merit a look.