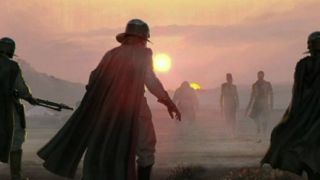 EA is shutting down Visceral Games. The studio, which began as EA Redwood Shores in 1998 and changed its named in 2009, was responsible for games like the Dead Space series, Dante's Inferno, and Battlefield: Hardline. Perhaps most notably, it was also working on a new Star Wars project led by former Legacy of Kain and Uncharted series director Amy Hennig.

That game, which has been glimpsed in a few promotional trailers but never received its own time in the spotlight nor had an official title, will be moved to a team "from across EA Worldwide Studios," led by EA Vancouver.

Below is an excerpt from EA executive vice president Patrick Soderlund's announcement of the closing, emphasis mine:

"Our Visceral studio has been developing an action-adventure title set in the Star Wars universe. In its current form, it was shaping up to be a story-based, linear adventure game. Throughout the development process, we have been testing the game concept with players, listening to the feedback about what and how they want to play, and closely tracking fundamental shifts in the marketplace. It has become clear that to deliver an experience that players will want to come back to and enjoy for a long time to come, we needed to pivot the design."

It sounds like the linear action game is getting broadened and expanded into a full-fledged open world title, though Soderlund writes that "we will maintain the stunning visuals, authenticity in the Star Wars universe, and focus on bringing a Star Wars story to life." The game will, however, have to be delayed, from a previous window of fiscal year 2019 (meaning anywhere between April 1, 2018 and March 31, 2019) to a new timeframe yet to be announced.

Soderlund says EA will attempt to relocate any Visceral staff to other projects. Kotaku's Jason Schreier wrote on Twitter that Hennig's future with the company is uncertain.

EA spokesperson tells me: "We are in discussions with Amy [Hennig] about her next move."October 17, 2017