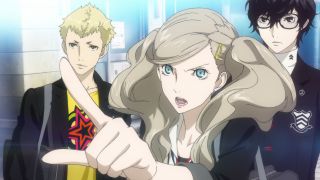 Persona 5 is breaking its Valentine's date with fans outside of Japan. Atlus announced today that it's delaying the game to April 4, 2017, a little less than two months after its former February 14, 2017 release date. It's a heartbreaker for Western fans who have had little to do but watch their Japanese counterparts play since September 2016, and they let the anguish pour forth on Twitter.

Fortunately, it wasn't all bad news. Atlus confirmed that it will release Persona 5's original Japanese audio track as free DLC for both the PS4 and PS3 versions, effectively making it a dual audio release. And a free PS4 theme featuring Phantom Thief Ryuji Sakamato is available for less than 24 hours.

But enough about that, on to the horrified reaction gifs.

Me when I saw that Persona 5 was delayed AGAIN: pic.twitter.com/frv0fY1bC8November 16, 2016

Persona 5 getting delayed from Valentine's Day to April 11th is an accurate representation of valentine's day for me: utter sadnessNovember 16, 2016

This is getting way too real. How about some spots of sunshine?

Fans hearing about dual audio news in Persona 5 then the delay like pic.twitter.com/21Sd2Jb2U1November 16, 2016

*ignores news of Yet Another Persona 5 Delay, instead focuses on the fact that in three weeks we'll finally have FFXV and The Last Guardian*November 16, 2016

MFW Persona 5 is delayed another few months. Look, Final Fantasy XV has this sewn up for long waits, you aren't going to beat them. pic.twitter.com/VH4jc4qUcbNovember 16, 2016

Well, at least spring/summer 2017 is looking pretty good at this point.

Calling it now Persona 5 and Zelda Breath of the Wild will be released within at least 3 weeks from each other.November 16, 2016