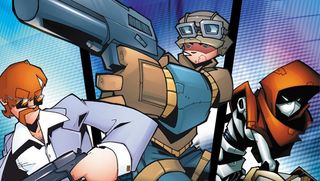 A new TimeSplitters game is officially in the works, and THQ Nordic has revealed that one of the original creators Steve Ellis has joined Deep Silver to “help plot the future course of the franchise.” Nordic acquired the rights to create a new TimeSplitters IP back in 2018, with Deep Silver taking on the project. Since then, news about a potential TimeSplitters 4 has gone pretty quiet.

Word about the co-creators involvement in the upcoming TimeSplitters title came to light in THQ Nordic’s latest financial report, which also revealed a new Saints Row game is happening, and Dead Island 2 is fact still on the way with studio Dambuster now at the helm. Ellis was part of Rare back in the 90’s, working on games such as Golden Eye 007 and Perfect Dark before leaving to help form Free Radical Design. The newly formed studio released the first TimeSplitters back in 2000 on the PlayStation 2, with TimeSplitters 2 and the third instalment TimeSplitters: Future Perfect landing on the PS2, Xbox and Gamecube in the years that followed.

Since Future Perfect came out back in 2005, fans have long been hoping for another round of its particular blend of zany shooting action. With its cartoony style, brilliant arcade modes and map maker features - along with plenty of monkey business - word about another potential sequel has been floating around since 2007. The financial report doesn’t state what Ellis’ official role is or when we can expect to see TimeSplitters make comeback, but bringing one of the original creators on board is enough to get us even more excited about its eventual return.

Fancy getting nostalgic about the series? Here's how TimeSplitters 2 was an FPS a whole generation ahead of its time.