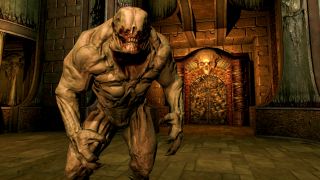 Ask a random gamer, PC owner or not, for opinions of Doom and you’ll be lucky if you get one. Ask them for memories and you’ll get a dozen. Even those who’ve never shot the barrel and turned the imp into pixel mush remember it as if they had, its greatness written in lost man-hours, failed exams, smuggled serial cables and soiled pyjamas. Little wonder, then, that creator id Software chose to apply that legendary brand, almost a decade later, to a game that arguably didn’t need it.

Tim Willits and id CEO Todd Hollenshead have leapt, fiercely at times, to the defence of their studio’s biggest commercial hit. “There are three people on the internet that keep making these posts that Doom 3 was ‘bad’,” said Hollenshead in July, “and they get no credibility from any other people. There’s some mass misperception out there”. Then Willits, a month later: “Games that sell over three-and-a-half million copies are not bad games".

They’re right, of course. Statistically, the three-million-and-rising club is something of a critical elite. And, yes, there are people out there who found the game difficult, whose opinions have since decayed into the kind of dismissive grunts Hollenshead describes. Doom 3 was a kludge, part FPS, part survival horror, part modern and part anachronism. As a rollercoaster, it was meticulously plotted, winching players to the precipice with a great opening act, then plunging them into cramp-inducing terror before retrieving them, often with as literal a device as a carriage on rails, back into their comfort zone. And as an environmental mind-game it was ruthless, able to regulate pressure as strictly as a Martian airlock to a point where you could almost feel its grip around the lungs. But somewhere in the mix, things got slightly messy – something often put down to a ‘funhouse’ approach that stems exclusively from 1993.

The analogy was, you suspect, never designed to make Doom 3 a better game so much as a compatible one – a rightful heir to the chainsaw, the fist and that hair-metal grimoire of zombies, Cacodemons and biomechanical titans. ‘Boo!’ was its motto – and what better template, it figured, than the dangling skeletons and Jack-in-the-boxes of a mechanical ghost house. Ask many what they remember of this Doom, though, and they’ll recall a game so spring-loaded you could almost hear it creak. They might even boil it down to one recurring scene. A pile of ammo sits in an alcove black with impenetrable shadow. Knowing the outcome, you reload what you can and prepare to jog the mouse wheel through an increasingly desperate arsenal. You grab the pickup, the place glows red with Satanic glyphs, and you backpedal through weapons and corridors until the ambushing creatures are well and truly dead. Then, somewhere around the next corner, the trap resets.

Fun? Many insist that it is. Some will even call you names – nasty internet names, no less – for not jumping on that trigger, diving into the shadows, chomping the ears off those commie bastards and spitting them into the sky. Those with a milder taste for red meat tend to sit on the fence, paying due respect to some very well-manufactured – but manufactured nonetheless – terror. Others, though, find the relentless, mathematical precision of the whole thing annoying, and eventually numbing. Hitchcock said something about anticipation being better than a bang. Whatever your opinion, you have to concede there’s bang by the truckload here.

If it isn’t in your face, throwing the camera every which way with claws or teeth, the game’s behind you, throwing the camera every which way with claws or teeth. Or it’s bowling fireballs, launching homing missiles and diving across the room in less time than it takes to pull the trigger. It has a casual disregard for the time between visual and physical contact – a time in which many of the best horrors enjoy so much of their action. It’s the time in which Resident Evil 4 teaches you to fear its enemies but also admire their cunning. Silent Hill has you marvel at the bizarre and despair at the tools you’ve been given. BioShock lets you watch its society tear itself apart before its eyes turn on you. And Dead Space, this unlikely genre star, makes you do the lot, mixing things up to make a copycat game unique. The biggest issue in Doom 3 isn’t that you’re given too little time to recover and reset before the next big scare – it’s that you’ve too little time to fight.

But consider the circumstances. This was, like id games often are, a leap into darkness in more ways than one. It was a launch title, effectively. John Carmack, who superstitiously clings to the role of deskbound engineer but is actually company president, can never quite know what id’s designers have in mind, just as his own thoughts are communicated largely through science. What emerges from that relationship is a congruence of art, design and technology far more volatile than developers further down the food chain experience. Here, it produced an extraordinary gamble: a lighting system so extreme that anything not immediately adjacent to a light source was plunged into total darkness.

Usually, it’s a modder’s job to do something as crazy as strip almost all the ambient lighting from a game, and at times Doom 3 feels more like an artistic statement than a functioning firstperson shooter. But returning to it after years of day/night cycles, incremental naturalism and hollow promises from DirectX 10 – and if Steam’s regular deals on id’s entire back catalogue don’t entice you, the upcoming open source version leaves little excuse – what shines in the dark is the game’s cinematography, a towering balancing act of vision and resources. Not one object has been placed randomly or in haste – because it couldn’t be. Every flickering lamp, touchscreen panel, muzzle-flash, fireball or sweep of the torch demands more triangles from graphics cards which, at the time, didn’t have triangles to spare. Before even a fart emerged from the bowels of Hell, the logistics must have been spine-chilling.

A shame, then, that so much of that intricacy was dismantled. There was the last-minute breakdown of id’s relationship with Nine Inch Nails frontman Trent Reznor, due to deliver an ambitious ‘soundscape’ to rival Quake’s, not to mention a substantial body of sound effects. Replacing them was a bulimic, surreal array of gunshot noises and a single, lacklustre theme tune – problems compounded by the patent wrangle with Creative over the ‘Carmack’s Reverse’ stencil shadowing method, which cost the game (initial) support for the popular EAX audio system. Later would come the ‘no duct tape on Mars’ complaint, because you couldn’t dual-wield your one reliable light source: the torch. Within weeks there were mods for extra lights, effectively yanking out the game’s heart yet seen by many as essential given its constant, vicious combat.

It begs an awkward question: how good could Doom 3 have been had it not been Doom 3? Dismantle the booby-traps, close the portals and leave the chainsaw in the ’90s, and what kind of game could id Tech 4 have built? You don’t have to look far: it’s in there, interrupted and obscured by the action. Shortly after release, Hollenshead described the game’s four scares: tension, surprise, physical revulsion and atmosphere. But there’s a fifth it does best of all: captivity. Not as exultant as Rapture, as haunting as System Shock 2’s Von Braun or as lonely as Dead Space’s Ishimura, the UAC Mars facility is still one of the great pressure-cookers, with strengths beyond any Hell Knight or Arch-Vile.

Bringing to mind the movie Outland, in which another space-bound mining colony goes out of its mind (and the odd airlock), it proves that man is quite capable of making his own hell without some poxy artefact. Its rooms and corridors are an incomprehensible dungeon of machinery. Its windows, a potential form of mental escape, only serve to imprison you further with views of Martian rock, just as Rapture uses the ocean floor. Its PDAs, billboards and amusements pitch homeworld optimism against grim reality. And in one standout scene, you’re popped out of an airlock into the open ‘air’, only to find a quarry no larger than a sound stage, your oxygen tanks forcing you back inside. A game, you could say, of disastrous escapes.

For a society, such confinement unlocks greater scares than Hell can provide: madness, betrayal, murder and despair. The sense of it is palpable in id’s game, and you expect to shine torchlight upon it at every turn. But because this is Doom 3, home of the chainsaw and the BFG, the horrors always come from without, the madness through demonic possession. A few shades of grey, you feel, could have darkened its world even further. Instead, the real terror lies solely in videos, emails and maybe a game that could never have been. Not with that title, anyway.