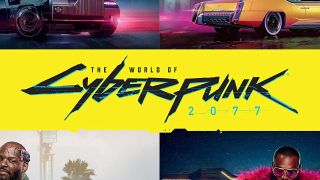 If you can already tell you're going to become emotionally and intellectually overinvested in Cyberpunk 2077, you might as well save $5 on the companion book right now. CD Projekt Red is collaborating with publisher Dark Horse to put out The World of Cyberpunk 2077, an extensive, lovingly designed exploration of the game's fictional near-future world. It's coming out on April 21, 2020, just a week after the game arrives, but if you pre-order and use promo code PRIMEBOOK19 right now you could make the final price for the hardcover edition $34.99 as a future-proof Amazon Prime day game deal.

The World of Cyberpunk 2077 | $34.99 with code PRIMEBOOK19 at Amazon
The little teases we've seen of Cyberpunk 2077's world so far have been full of captivating details, and this book will be the most extensive, official look at them you could hope to find. So why not save $5 on it ahead of time?View Deal

Cyberpunk 2077 takes place in a near-future version of our world… sort of. Since it takes place in the same fictional universe as the Cyberpunk 2013 and Cyberpunk 2020 tabletop roleplaying games, it's actually had even more time for its history to diverge from ours than you might first expect.

Cracking open The World of Cyberpunk 2077, you'll be able to see how everything from geopolitics to gang struggles have shaped the current state of the world. Since it's coming out a week after Cyberpunk 2077, it may even have some spoiler-ish material to give you a better understanding of the game itself, though it probably won't go too far in that direction.

If you're planning on picking up Cyberpunk Red, the upcoming new edition of the Cyberpunk tabletop RPG, The World of Cyberpunk 2077 could also be a source of inspiration for some new adventures and characters. Just remember to subtract a decade or so.

Some online stores give us a small cut if you buy something through one of our links. Read our affiliate policy for more info