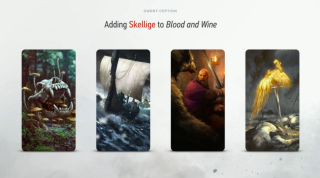 Everyone’s favourite game within a game Gwent is getting new cards as a part of The Witcher 3’s upcoming Blood & Wine expansion.

The only card that was really fully explained was ‘Mushroom’, a special card that turns berserkers units into bears. The rest were vaguely outlined, including the boat which is some sort of siege unit, a new special character who’s ‘a little bit crazy’ and the Golden Cockerel.

That last one apparently is inspired by Norse mythology but that’s all CD Project Red are saying for now. There is a cockerel called Gullinkambi in viking legend who supposedly crows to signify the beginning of Ragnarök. Good luck working out how to play that one.