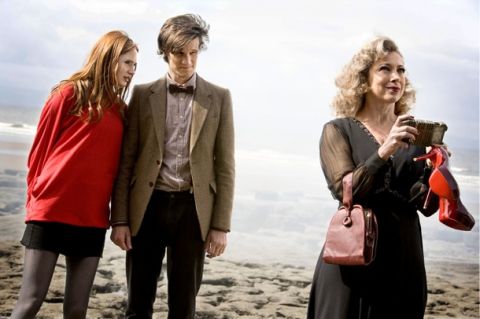 TV REVIEW: Doctor Who 5.04: Good enough to make you weep

Okay, a lot is dependent on what happens on part two, but on the evidence of “The Time Of Angels” we could well be witnessing the first true classic of the Eleventh Doctor’s era.

You can’t help thinking that when fans first heard that Steven Moffat was the new showrunner, they half-hoped that Doctor Who would be like this every week. Of course, that was never going to happen. The show thrives on variety. Moffat couldn’t churn out “Blink” week after the week. That’s not to say that the lighter, more fantasy-tinged story are some irritating necessity we have to put up with. They can be classics too (they often are), and they’re a vital part of the show’s space warp and weft. But it just seems that with Moffat back on familiar ground, the show feels more confident, strident and self-assured.

“The Time Of Angels” is Aliens to “Blink”’s Alien . And in many ways it’s also a very traditional Doctor Who story: a group of people in an enclosed space being picked off one by one by the monsters. It’s a format that worked well for decades and it's good to see it being used so well here. The episode certainly rates highly on the tension scale.

But it’s not all doom and gloom and the story kicks off with a marvellously bonkers, totally outrageous teaser, and a typical piece of Moffat timey-wimey plotting, reintroducing us to River Song, as sassy and loveable as ever. Alex Kingston looks like she’s having a riot. Also, her relationship with the more geeky Doctor Eleven is possibly even more fun than it was with Doctor Ten.

The early scenes crackle with electric dialogue. What Who fan couldn’t laugh out loud at the TARDIS gag? But with the arrival of Father Octavian and his clerics (soldier clerics – fantastic idea), and the revelation that we’re dealing with a Weeping Angel, the episode takes a darker, creepier turn. The scene with Amy and the Angel reaching out of the video footage is just stunning, and the subsequent trek through the Maze Of The Dead is edgy and hypnotic. Then, when it turns out we’re not dealing with one Angel, but thousands, the story steps up to another level. It’s just superbly paced, the changes in tone happening gradually and organically.

This must also be Matt Smith’s greatest 45 minutes yet. Only rarely does the shadow of Ten rear its head (his pep talk to Bob, especially) whereas the rest of the time he truly is turned up to Eleven, the gawky sulky teenager in the aged professor’s clothes.

Production-wise the episode also shines. The FX are top-notch, especially the crash site and the CG caves. The direction is spot on, boasting some evocative camerawork, and making great use of shadows and gloomy light. It’s a perfect combination of script and sympathetic design and shooting style.

To cap it all off, there's a cliffhanger of compelling intensity, with the Doctor spouting a speech of defiance the power of which we haven’t seen since Christopher Eccleston’s “I'm coming to get you, Rose.”

Amy Matters: Once again, Amy seems to be acting like she’s know the Doctor for years. “Nobody ever you calls you sir,” she says, but after just four stories is she in any position to judge? And yet it’s consistent with her character in “The Eleventh Hour” and “The Beast Below” where she also seems to have got this Doctor bloke nailed pretty quickly. Is Moffat just telling us she has amazing powers of perception? Or has Amy got more experience of the Doctor than she’s letting on?

LMAO: You’re never short of a snog when you've got two heads, apparently.

Intriguing: It’s a nice touch that the River Song here is a younger version of the one from “Silence In The Library”/“Forest Of The Dead”, but anybody else thinking, “Hmmm… Time Traveler’s Wife ”?

Goooaallllll! Is the fact that Matt Smith kicks the gravity ball into the air an in-joke about the actor’s former footballing ambitions? He does do it very convincingly.

Trivia: Talking of gravity balls, we last saw one used in “The Impossible Planet”/“The Satan Pit”.

Nagging familiarity: Anyone else reminded of “Who switched the lights off?” Dave from “Silence In The Library”/“Forest Of The Dead” when dead Bob becomes the Angels’ spokesman? Also, Amy develops a stone hand, which presumably would also have eventually happened to the character Karen Gillan played in “The Fires Of Pompeii”.

Frustrating: Maybe I should go to SpecSavers, but didn’t anyone else find it frustrating that we didn't get even a half-decent glimpse of some of the museum displays, especially the one that the Doctor claims is “one of mine”.

Best Line:
River Song: “It's not supposed to make that noise. You leave the brakes on.”