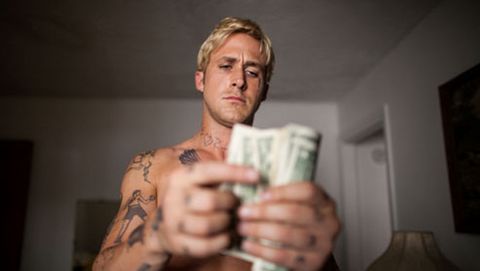 Ah, that difficult follow-up movie, the film to prove your attention-grabbing calling card was no flash in the pan.

Some have done it, with breakouts as prodigious as The 400 Blows , Knife In The Water , Performance , Badlands and Reservoir Dogs followed, respectively, by Shoot The Pianist , Repulsion , Walkabout , Days Of Heaven and Pulp Fiction .

But for every The Elephant Man or The Last Picture Show there’s a The Brothers Bloom or Southland Tales - stumbling, fumbling efforts that attain mediocrity or worse.

To paraphrase Orson Welles (who himself succeeded the brash brilliance of Citizen Kane with the gentle genius of The Magnificent Ambersons ), it’s hard enough to make one masterpiece.

Well, Derek Cianfrance’s The Place Beyond The Pines is no masterpiece, nor is it as emotionally devastating as his breakthrough, Blue Valentine .

But it’s no let-down either: the quality of the filmmaking is irreproachable; swathes of originality outweigh the odd recourse to cliché; and the merit of the storytelling at times matches the film’s colossal ambition.

Like The Deer Hunter , this is a picture that glowers with somberness and maleness as it blends the intimate, epic and mythic over an expansive canvas.

Unlike The Deer Hunter , it cannot, ultimately, muster the significance to be considered as the movies’ answer to the Great American Novel.

The Place Beyond The Pines opens with an extensive tracking shot, as Ryan Gosling’s Luke slips a sleeveless Metallica t-shirt over his tattooed torso and exits a ratty trailer to weave through a stream of people.

The camera sticks close to the back of his bottle-blond head and the edges of the frame throb with crowded stalls and neon-drenched rides. Luke is a carnival stunt rider; the unbroken shot concludes on his motorcycle standing beside a cage of death.

He packs in his peripatetic lifestyle when he learns past-flame Romina (Eva Mendes) has a little boy and he is the father. Determining to provide for them - never mind the guy already doing the job - he lands a gig as a mechanic and then, short of cash, takes to robbing banks.

These exhilarating forays introduce Bradley Cooper as Avery Cross, a rookie cop who spends the second chapter of this unusually structured drama juggling hero status and corruption while himself adapting to fatherhood.

A third chapter, set 15 years later, focuses on the pair’s damaged teenage sons. As Philip Larkin almost wrote, “They fuck you up, your dads.”

The opening segment evokes memories of previous Gosling vehicle, Drive . Like Driver, Luke is internal, inscrutable, his placid surface liable to explode in a geyser of violence.

His driving skills are impeccable, his mentor figure ( Animal Kingdom ’s Ben Mendelsohn, doing a lot with a small role) is a mechanic. He’s an outsider, a criminal, an unhinged anti-hero rocking an unusual look. He lives by a strict moral code at odds with society’s rules

And he commands the screen, his every expression, gesture and quietly spoken word demanding scrutiny. Cooper also fares well given his crooked cops storyline plays out like a skim-read of Serpico , Prince Of The City , Cop Land and more.

Utilising those vulpine looks, Cianfrance keeps his camera close to his star, finding not just the innocence in his impossibly blue eyes but the glinting obstinacy. Here, as in Silver Linings Playbook , Cooper displays a bristling complexity.

It helps that he receives strong support from Bruce Greenwood as a high-ranking brass and Ray Liotta as a veteran blueblood; the former brings his trademark gravitas, the latter again plays venal, again plays dangerous, but does it so, so well. (And if Rose Byrne, as Avery’s wife, is even more sidelined than Mendes, it’s excusable given The Place Beyond The Pines is a study of fathers and sons.)

Cianfrance shoots in long takes, with long lenses, to provide the actors space to occupy their scenes, and he teases terrific performances from Dane DeHaan ( Chronicle ) and Emory Cohen ( Afterschool ) as the kids in the final chapter.

It’s here that the film’s themes of legacy and fate float to the surface, with scraps of action echoing, tremulously, past events. Cianfrance is too good a writer/director to deal in blacks and whites and linear throughlines, but the sins of Gosling and Cooper’s flailing fathers do indeed fuck their boys up.

Meanwhile, the vast rural landscapes and choral-tinged score seek to imbue the lives of these hardscrabble characters with universal import. That it never quite takes hold is one of the reasons greatness does not reside in The Place Beyond The Pines .

That Cianfrance dares look for it and catches glimpses through the trees is, however, to his immense credit.