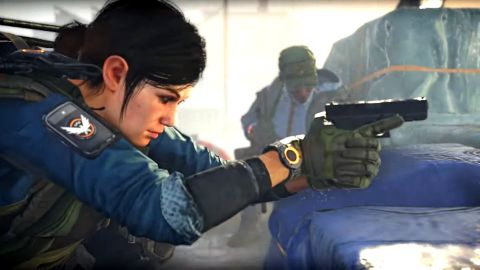 The Division 2 is a seriously accomplished looter shooter, with a gameplay loop that keeps on giving, and an endgame that will keep you playing for months (or years) to come.

The Division 2 is a perfect example of how to absolutely nail a sequel. The original game suffered from a lacklustre campaign, full of filler missions and side content that never felt all that rewarding, but that's absolutely not the case with The Division 2. It takes everything The Division did well and puts it all together to make a vastly superior game, as it turns out that a few years of learning, and excellent examples elsewhere in the genre, can make for a sequel that shines out among its rivals - particularly Anthem. Of course, it's not entirely perfect, but after the onslaught of issues and woes surrounding Anthem's launch, it's really refreshing to play a game like this that just works, and, more importantly, is incredibly fun to play.

On the surface, The Division 2 is more of what came before. It's a solid third-person shooter, focused around co-op shootouts with three different factions (and later, a fourth) and developing skills, abilities, and a loadout that compliments your play style. But it's the fact that you constantly feel like you're progressing rather than just ticking things off a list that makes Ubisoft's latest open-world such a delight to explore and fight through. The world reacts to your action and develops accordingly; everything you collect has a purpose; the loot cycle is rewarding and even offers silly apparel options and dyes. There's so much to do here that you'll be playing for hundreds of hours before you've done it all. And by that time the Division 2 roadmap will already be underway. The Division 2 is putting other looter shooters to shame with just how established it is at launch.

Your overall objective is to take back Washington D.C., your latest playground, from three factions and help out the citizens that are left. Technically, it's a simple task, but that involves taking back Control Points, wiping out enemy strongholds, and slowly amassing weapons and gear that makes you the perfect Division agent.  The skills are particularly rewarding, as they're not really skills but gadgets to use in combat. They range from a rolling seeker mine and a drone that you can unleash on unsuspecting enemies, to a ballistics shield or something called a hive, which basically emits lots of tiny robot bees that attack your foes with intense precision. And deadly stingers. Each of the eight skills available has at least three versions to unlock too, all of which change how each of them fundamentally work. For example, the turret may seem straightforward, but it can either be equipped with any of the following: a traditional 360-degree spinning machine gun; an incendiary tank that it fires in a cone for area-of-effect damage; an explosive artillery launcher; or a long-range semi-automatic sniper.

The more you dive into The Division 2, the more you realise just how far you can hone your personal playstyle and all of that can really influence how you work within a squad too. Your solo loadout might work for you, but in a squad it's more about blending skills and abilities to make more of the team. And you'll want to play as a foursome - or at least a healthy duo - for most of the later story missions and the rock-hard Strongholds, because they're not easy at all. It's incredibly tactical when you're working as a team, and the ability to change out your gear on the fly is... Well, after playing 70 or so hours of Anthem, it's amazing how something so simple, which will take for granted in other games, is so appreciated.

A story without a story

Whether you're playing in a squad or solo, rest assured: I was hooked from the first mission. It sees you fight your way through the grounds of The White House (which will eventually become your rather impressive main base of operations) moving from cover to cover, picking off enemies as you maneuver through bodies and abandoned Christmas presents, and spot not quite "Make America Great" caps as you do. The Division 2 deals with the pacing of its main missions incredibly well, introducing chunks of action and combat that constantly ebb and flow in a way that's utterly enthralling. Its main missions play out across linear sub-sections of the open world, with level design that could rival the likes of Call of Duty 4: Modern Warfare for atmosphere and spectacle, including a section that has you shooting your way through Washington's Planetarium, where you get a very different flavour of stars and stripes as the projected cosmos swirls all around you. The fact that The Division 2 manages to make this kind of linear storyline within an equally compelling open-world structure is seriously applaudable, even if the gameplay within is basically just 'go here, shoot the bad guys, get the loot' and repeat ad nauseum. Incredibly, it never feels monotonous, or repetitive because the locales you're doing all that within are so varied and atmospheric.

But for all the glorious settings, and genuinely stunning open world (if you can call a post-pandemic wasteland of a city pretty), it's a bit of a shame that the plot is such a disappointment. Aside from taking back control of the city and various interactions with some side characters, there isn't really much of a story to speak of at all. For a game whose marketing paints its political commentary as its main draw, and a city that's been ravaged both by disease as well as rioting and combat, none of its backstory is ever explored properly. It manages to weave a line where it says absolutely nothing of politics, despite a mission where you fight through a museum exhibit on the Vietnam War, or have to go and rescue the Declaration of Independence. There are some interesting statements in the comms you can find and in some of the things you'll find littered about the world, but The Division 2’s story is obviously trying to play it safe. And in the end it fails to resonate. It basically ends up being a game about who's got the best guns and gear.

That's pretty much the only thing holding back The Division 2 from being a full-marks game, because in terms of everything else it has to offer, it's ticking every box - particularly when it comes to the endgame. You're not prepared for the changes to the map in the endgame but trust me, they're worth the wait and basically reset everything. Thanks, I literally just made everything green again, but OKAY. The new foes really don't care about your feelings either; they're armed to the teeth and basically weaponised Boston Dynamics' dog robots, and quickly take back all of DC to the point that new invaded versions of the main story missions start appearing on the map. While that might sound frustrating, playing through the same story missions again isn't a matter of repetition. The stakes are much higher this time, and everything feels like a real step-up. Plus, the more you play through the endgame, the higher your world tier will rise, which raises the stakes. AGAIN.

The playground of Washington DC

Of course, there's also the PvP Dark Zone to explore, and this time there are three of them. Thankfully as soon as you step into them, all stats get normalised, which makes things a little less daunting. It's still extreme of course - the AI ain't got nothing on your fellow players - and I fear how insane it'll be when players get better and better, but it's a major change of pace from the main area of DC, and there's always the lure of better loot.

All in all, The Division 2 has nailed the game as a live service thing. The teams over at Ubisoft have really pulled off an impressive looter shooter that's full of content that's satisfying to complete and constantly pushing you forward. There have been so many "just five more minutes" moments that have turned into "another few hours" that I am concerned how much The Division 2 may eclipse other games. But in a world where so few games of its type launch so successfully, there's plenty to praise about Ubisoft's latest foray, and I can't wait to see what else its Washington has in store for me.

The Division 2 is a seriously accomplished looter shooter, with a gameplay loop that keeps on giving, and an endgame that will keep you playing for months (or years) to come.